News
You are here: Home1 / News2 / Eurovision3 / Eurostars4 / This was Russia’s second choice for the Eurovision!

As you already know, Sergey Lazarev brought his motherland back to Eurovision’s top 3 by performing his epic ballad “Scream”. The song is composed by Dimitris Kontopoulos and the lyrics were Sharon Vaughn’s work.

Before the announcement of “Scream”, Sergey admitted that the song was chosen among 2 other recorded songs. Later this day it was released the first part of his EP “Ya ne boyus” (I’m not afraid), in which is included a bonus track in English. The song is called “Goddess” and it’s believed that this was one of the 2 other songs-choices for the contest, as it’s written by Dimitris Kontopoulos and it lasts less than 3 minutes.

The second part of his EP is expected to be released later in November. Probably the third song will be included there.

Could “Goddess” bring the trophy to Russia? 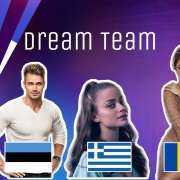