James Newman represented the United Kingdom on the Eurovision Song Contest 2021.  However, he has been working in the music industry as a songwriter way before.  In 2012 Newman had the inspiration for his song, Waiting All Night back when he was working in a restaurant.

British band Rudimental feat. ‘Waiting All Night’ Ella Eyre recorded Newman song which became a success in his home country. Waiting All Night reached Number 1 in the charts in 2013.  Furthermore, it won the ‘Best British Single Award’ at the Brit Awards.

However, Newman was sued by Kelly-Mary Smith.  Smith who is a member of the duo Nu-Tarna claimed she wrote the song in 2006. Smith sued Newman along with co-writer Jonny Harris and three members of Rudimental – Kesi Dryden, Piers Aggett and Amir Izadkhah.

Fortunately for Newman, judge Zacaroli from the High Court dismissed the claims.  To reach to this conclusion, the Court took into consideration the expert opinion of musicologists.  Notwithstanding that Waiting All Night shares some similarities with Smith’s track Can You Tell Me, these were limited.  According to this opinion, the similarities on the lyrics could be explained as “commonplace expressions”.

James Newman started a career in the music industry as a songwriter.  Moreover, he has become a singer in his own right.  Newman represented the UK in Eurovision 2022 with the song Embers.  Unfortunately he finished last with 0 points. 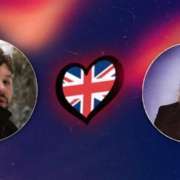 UK: Katrina believes James Newman’s song was one of the strongest, BBC have sent since 1997!
0 replies

All the information about the Greek entry in Eurovision 2022 so far!
Scroll to top