News
You are here: Home1 / News2 / Eurovision3 / Albania4 / Eurovision 2022: Here are the results of the allocation draw!

The Semi-Final Allocation Draw for the Eurovision Song Contest 2022 took place in Palazzo Madama in Turin. Find out below in which of the 2 Semi-Finals your country will perform and vote in. The annual event was hosted by Carolina di Domenico and Mario Acampa. 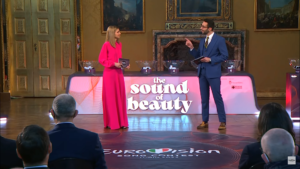 The Semi-Final Allocation Draw and Host City Insignia Exchange are key milestones on the path to the Eurovision Song Contest each year.

During the ceremony, Ahmed Aboutaleb, Mayor of Rotterdam, passed on the Host City Insignia to Stefano Lo Russo, Mayor of Turin. The insignia key chain, weighing over 30 kilograms with the new addition of Rotterdam’s insignia, was handed over to Turin. The Italian city is now officially the Host City of the Eurovision Song Contest 2022. 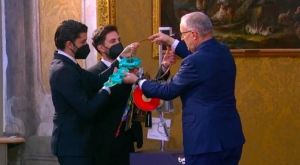 The 36 countries competing in the semifinals were divided into six pots, based on the points they have exchanged in recent years. This is done in order to avoid, as much as possible, the alliances and bloc voting that appear every year in the voting. 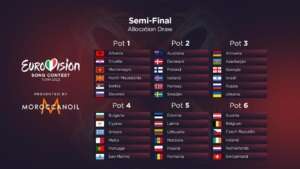 With the host Italy, directly in the final, along with the rest of the Big 5 (UK, France, Germany, Spain), the first part of the draw determined the semifinal that the direct finalists will vote.

Will vote in the 1st Semi-Final:

Will vote in the 2nd Semi-Final:

Their performance in the dress rehearsal will be shown in the semifinals where the six aforementioned countries were drawn to broadcast and vote. This was done at Eurovision 2016 for the first time, for reasons of equal visibility of the countries that are directly in the final and the countries that compete in the semifinals. Essentially, viewers watch each entry twice during the shows.

The draw of the countries for the two semifinals had two parts. In the first part, the 36 countries that participate in the semifinals, were drawn in which of the two will compete. 18 countries will compete in both the first and the second semifinal.

In the second part each country found out if it will appear in the first or in the second half of the semifinal that will compete. The exact order of appearance will be determined by the EBU and the producers of the show at a later time. 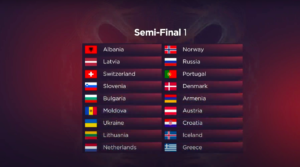 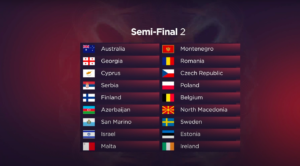 Turin will host the 66th Eurovision Song Contest from May 10th to 14th at the Pala Alpitour. The motto of this year’s event, as chosen by the organizers, is “The Sound of Beauty”. 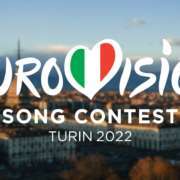 Armenia: Here’s some exclusive information about the internal selecti...
Scroll to top