The next artist that sets foot on the Eurovision 2022 stage for his second rehearsal is Nadir Rustamli, representing Azerbaijan with the emotional ballad “Fade To Black“.

Nadir is 22 years old, born on July 8, 1999 in the Salyan area. Graduated from Azerbaijan University of Tourism Management. Although he has been working professionally with music for 4 years, he has been working in this field for 7 years. Apart from singing, he composes, plays the piano and guitar, but is also involved in sports.

She has participated in many domestic competitions, such as the National Student Spring 2019 song contest (first place) and the YouthVision 2019 international song contest (second place). In addition, he is the winner of this year’s “Voice of Azerbaijan”.

Nadir starts singing his song in a a prop that looks like a big staircase. Then you see that there’s also another person in that staircase that is doing the exact same movements with the singer, very Azerbaijan 2013. Towards the end of the song the staircase is divided in two and the dancer is dancing very intense. Nadir in awesome vocally and the whole vibe of perfomance is very dramatic. The camera angles are very tight and on point.

His second and third run were also very good with no changes.

A perfomance that juries will probably support! 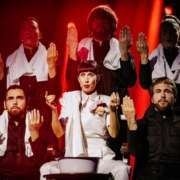 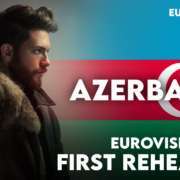