News
You are here: Home1 / News2 / Eurovision3 / Eurovision 20224 / Moldova: Zdob Zi Zdub are the only artists to have qualified from three...

Apart from Ukraine, which remains the only country in the competition that has never been eliminated in the semifinals, another interesting statistic from yesterday is coming from the representatives of Moldova, Zdob Zi Zdub. They are the only artists in the history of the institution who have managed to qualify from the semifinal to the final three times!

Zdob și Zdub represented Moldova in the country’s maiden run in 2005. From the only semi-final at the time, the folklore band passed comfortably, finishing second with “Boonika bate doba“. Then in the final they also went famously, as they finally finished in sixth place.

In 2011 they returned to the competition with “So Lucky”. Despite their marginal qualification (10th place), in the final they won the 12th place, which is not bad!

Zdob Zi Zdub made history last night, since with the qualification of “Trenulețul”, they are the only artists who managed to qualify from three semifinals!

What position do you think Moldova will manage on the grand final? 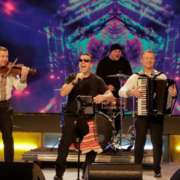 Ukraine: They remain the only country in the contest with no non-qualificat...