Iveta Mukuchyan, Garik Papoyan and Karina Ignatyan will host Junior Eurovision 2022.  The TV presenters were chosen by ARMTV after an internal selection.

Today Armenian broadcaster ARMTV made this announcement.  The hosts are very well known among Eurovision fans.  The three hosts will be in charge of presenting the 20th edition of the Junior Eurovision Song Contest which will take place at the Karen Demirchyan Complex in Yerevan on December 11, 2022.

Iveta Mukuchyan is a singer and model.  She started her career in the 2010s participating in different music shows in her country.  However, she is better  known for her Eurovision participation in 2016 with the song LoveWave in Stockholm.  She ended in 7th place.  After her participation she has continued being associated with Eurovision, participating as a juror in different national selections.

Garik Papovan has a multifaceted career in Armenia.  He has recognition for his work in the film, television, comedy and the music industry.  Moreover, he is the songwriter behind the Armenian songs for Eurovision in 2014 and 2019 Not Alone and Walking Out.  He was in charge of giving the jury votes of Armenia in the last Eurovision Song Contest

The Junior Eurovision Song Contest will take place in December 11, 2022 in Yerevan after Armenia’s victory with Maléna and her song Qami Qami.  16 countries will compete in the festival. 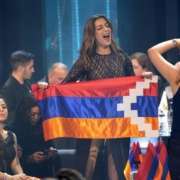 Iveta Mukuchyan: “I was invited to represent Germany in Eurovision 2021, but got rejected because I raised the flag of Nagorno Karabakh
0 replies