News
You are here: Home1 / News2 / Eurovision3 / Australia4 / Eurovision 2023: The odds after the Ukrainian national final!

A few hours have just passed since the first national final of this season and as expected, there are not a few rearrangements in the betting tables. That’s why your favorite column is here again, to give you a first taste of the betting odds ahead of the 67th Eurovision Song Contest.

While you are preparing for your Christmas break and a “hot” Eurovision winter, the bookers are already busy, with the Eurovision 2023 winner section already being offered to some companies. So, we’re taking this opportunity to present to you what we have so far for the next contest.

Despite the dominance of an underdog in yesterday’s Ukrainian national final, TVORCHI, the Eastern European country still remains at the top of the betting tables. Nevertheless, the odds for a possible fourth Ukrainian victory are “rising”, approaching 4.40 in some companies.

This is a clear increase compared to the previous time period, where a victory of Ukraine barely tripled the money of the bettor. The Ukrainian back-to-back is currently being played at odds between 2.75 and 4.40.

Behind Ukraine, in the Top-3, are Italy and Sweden. The Eurovision 2022 host and the six-time winner of the competition are among the heavy favorites for Eurovision 2023, with bookers relying mainly on the long tradition and quality of entries at Sanremo and Melodifestivalen respectively. Italy’s win is offered at 8 and Sweden’s win at 10.

Spain and the United Kingdom complete the top five. These are two countries that impressed in Turin and in which the betting companies show confidence that they can achieve an equally successful result in Liverpool in May. Bookers give the British victory at odds between 7 and 18, while the corresponding Spanish one between 15 and 16.

Greece is seen as the sixth favorite to win Eurovision 2023, with bookers recognizing the positive results of the 2021-2022 biennium and the change of approach by ERT within the current decade. Greek victory is played at odds between 17 and 20.

In seventh and eighth place, with similar odds, Norway and Australia are playing. Both are played at a maximum of 21, making two respectable sizes for our favorite contest. Ninth is France, which is called upon to prove that the 2nd place in 2021 was not a “firework”, while the first ten are jointly completed by Belgium and Serbia. Both the Central European country and the Balkan country return 34 times the money of those who bet on them.

Do you think Ukraine can make it back-to-back and become the first country since Ireland in the early 90s to achieve back-to-back wins in our beloved contest? 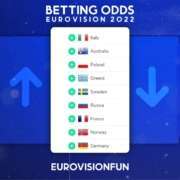 Eurovision 2023: The first odds for next May’s winner!
0 replies

Ukraine: With TVORCHI and “Heart of Steel” in Eurovision 2023...