UMK 2020,the process by which Finland has chosen to participate in the 65th Eurovision Contest, was completed last night. Aksel Kankaanranta was the big winner with the song “Looking Back”.

Just before yesterday’s final, Finland’s public television has confirmed that it will use the same way for Eurovision 2021  to choose its entry.

This year, with an open procedure, 426 songs were submitted to YLE to represent the country in Rotterdam.

The music producer of Ylex to be involved in the selection of Finnish entry for 2021 said:

“The open choice for artists and songs by the country’s creators has received a positive response from both the music industry and the Finnish public. We received great songs from many Finnish artists. The end result was to have a great Final. It is our great pleasure to continue the cooperation between Ylex and UMK. Searching for songs will begin in September, so get a chance to start writing songs from now in the spring”.

Shortly before UMK 2020 was completed, the process through which Finland chose to participate in the 65th Eurovision Contest. The evening’s hosts were Mikko Silvennoinen and Krista Siegfrids (country representative in 2013).

The final took place at the Mediapolis multiplex in Tampere, Finland.

Unlike the previous two years, not one but six different artists competed in the Finnish national final. The result was judged by 50% by an international commission and by 50% by the Finnish public.

The 8 countries that made up the international committees were:

Each country had four members in its committee.

The ticket for Rotterdam tonight were claimed by 6 artists:

Following the vote of the international committees, the result was as follows: 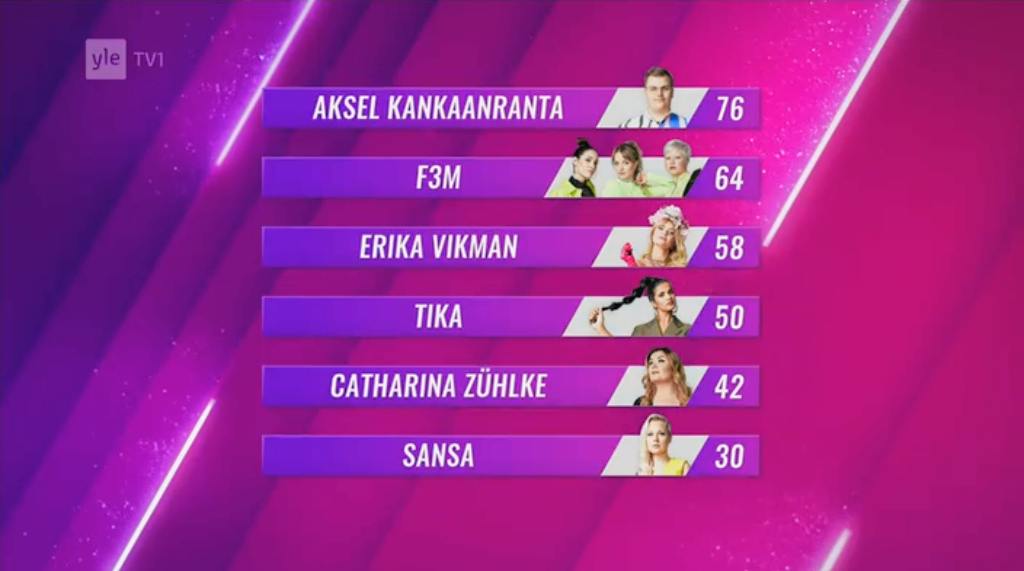 Aksel Kankaanranta emerged as the winner with the song “Looking Back” after the end of the poll. 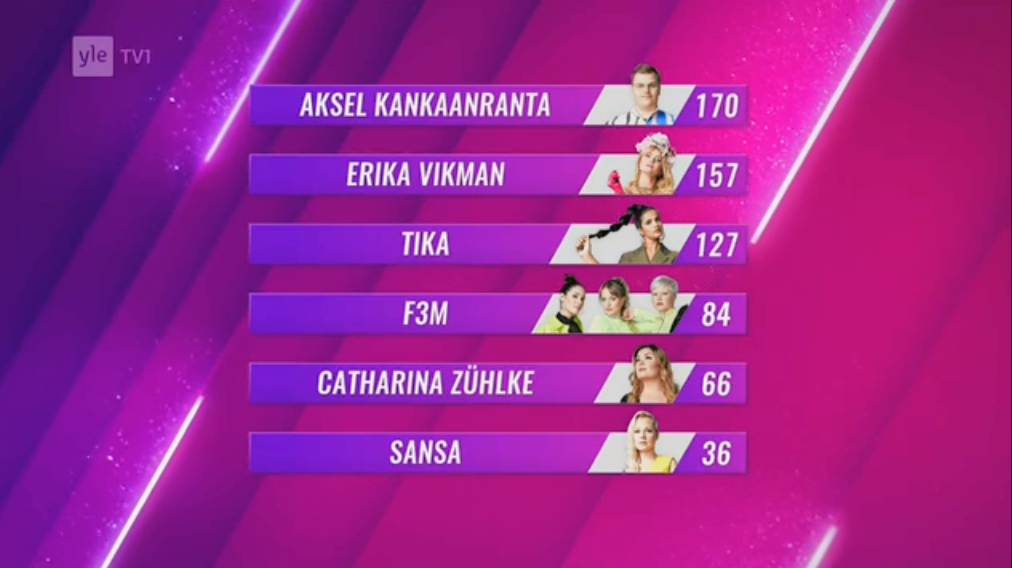 Tonight, the UMK 2020 will take place through which Finland will choose its entry in the 65th Eurovision Contest. The show’s  presenters will be Mikko Silvennoinen and Krista Siegfrids (country representative in 2013).

Unlike the previous two years, not one but six different artists will compete in the Finnish national final. The result will be judged by 50% by an international commission and 50% by the Finnish public.

The 8 countries that will form the international committees are:

Ticket for Rotterdam tonight will be claimed by 6 artists in the following order:

The final will take place at the Mediapolis multiplex in Tampere, Finland.

Residents outside of Finland can vote for their favorite song for free by simply downloading the special app available here and easily creating an account so they can vote.

You can watch UMK 2020 at 20:00 CET time time through the official UMK website here as well as through the live broadcast of Yle TV1 HERE.

Bets just before the UMK 2020 final

Many consider tonight’s competition night to be meaningless, as in Finland both in terms of bets, betting and YouTube views etc, there is the biggest favorite in the national final, at least for this season.

Erika Vikman with “Cicciolina” is performing at some companies even at 1.35, which makes it almost a given at UMK 2020. they do just as well in live. But we repeat that in no other national final this year, did we have any participation that is universally considered such a strong favorite. 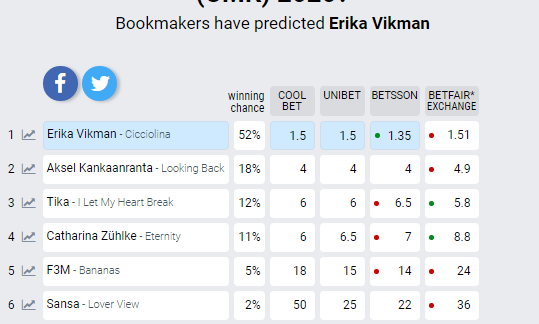 Finnish public broadcaster is returning to open selection after two years of direct artist assignments. As we informed earlier, 426 entries have been submitted and the six finalists have already been selected to compete on Saturday 7 March in the UMK 2020 final for the Finnish representation in Rotterdam.

Despite Finland’s exclusion from this year’s Eurovision final, interest in the contest remains high. 426 entries were made on the country’s public television, well in excess of the 300 songs submitted at the last open national final.

The six finalists will be announced at a special event on Tuesday, January 21. The winner of UMK 2020 will be determined by the vote of the television audience and the jury. The UMK 2020 will consist of one night only and no tickets will be sold. For the first time, UMK will not take place in Helsinki, but in Finland’s second largest city, Tampere.

The last time Finland selected its representative with an open selection was in 2017, with Norma John singing “Blackbird”, which,though favorite, were limited to 12th place in the First Semifinal with 92 points.

Finland’s public broadcaster, YLE, yesterday announced that the country’s selection for Eurovision 2020 will take place on March 7, through UMK 2020 of course.

Unlike what has happened in the last two years, Finland is returning to the open option.

From now on, one week, until November 7, interested parties can submit their entries online using the official UMK 2020 website.

Each artist can submit as many entries as he / she wishes, but only one is allowed to participate in the UMK 2020 finals. Foreign artists, as well as performers, are permitted, as long as there is at least one Finnish artist and one Finnish performer in each song’ s conduction (a Finnish national or a permanent resident).

The finalists will be announced on January 21st. On the same day, the committee chosen by them will be unveiled. UMO 2020 will consist of one night only and no tickets will be sold. For the first time, UMK will not take place in Helsinki, but in Finland’s second largest city, Tampere.”

The last time Finland selected its representative with an open selection was in 2017, with Norma John singing “Blackbird”, while,although we were considered as big favorites, were limited to 12th place in the First Semifinal with 92 points.