Since 15:00 CET, Amanda Georgiadis Tenfjord has been announced as the Greek representative at Eurovision Song Contest 2022, the upcoming May, at Turin Italy.

The big news had an imminent impact that reached media abroad, including Norway, the country where Amanda lives in and pursues her carrer. 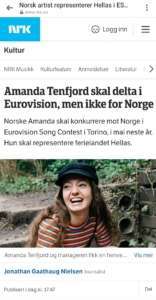 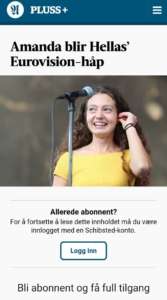 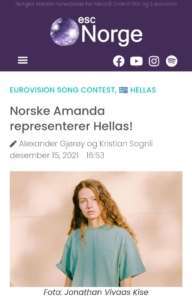 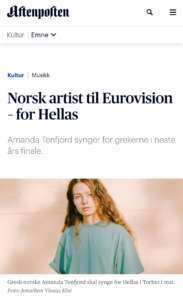 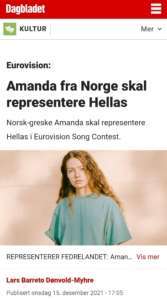 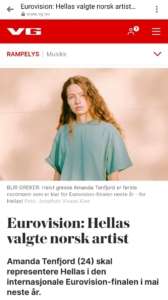 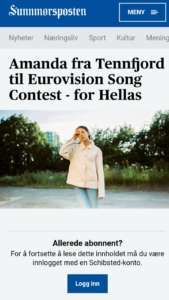 The aforementioned headlines show that the interest of the Norwegian media about Amanda is already significant, making us already hoping for a high point from the public televoting of Norway, at least.

Stay focused on  Eurovisionfun.com for the latest news regarding Greece and the rest of the 40 nations competing at the upcoming contest in Turin Italy 2022.

With the names of the five artists who continue to claim the Greek representation in Eurovision 2022 known, the weight of interest is now focused on their songs, but also in general on the other details of their proposals. END_OF_DOCUMENT_TOKEN_TO_BE_REPLACED

We are one step closer to the artist, who will represent Greece in the 66th Eurovision Song Contest. The ERT has published the names of the five artists, who still continue to claim the Greek representation in Turin. It was also announced, as Eurovisionfun has reported months ago, that the Greek representative in Turin will be chosen internally, by the expert committee.

25 artists submitted about 40 songs to ERT, of which the competent committee under Dimitris Papadimitriou selected the five best, performed by an equal number of artists.

So the five lucky ones who still hope to represent Greece in the upcoming Eurovision Song Contest are:

The expatriate artist from Norway, with an experienced and strong team, enters the internal selection with a classy, ​​inner ballad. – more HERE.

Nikolas Varthakouris participates in the internal selection with a cinematic song. He also has a strong team behind him, with Fokas Evangelinos standing out. – more HERE.

Three songs have been submitted by the Greek representative at Eurovision 2013. Completely different from Alcohol Is Free and in an insurgent rhythm, as he told us. One song of them is in the final list – more HERE.

Lou is is an expericed artist. Her true name is Louisa Sofianopoulou. She has worked with all the big Greek artists like Giannis Kotsiras, Eleni Vitali, Dimitra Galani and more. Her record label is called The Hubsters.

Joanna Drigo or Ioanna Drigopoulou is a young singer and musician with pop-rock influences. She sings both Greek and English songs. Her record label is Cobalt Eclectic.

The final selection will be made after the committee of ERT first has private meetings with the artists and the groups that frame their proposals. In these meetings each artist will give more information about his/her song, the plans of the stage appearance, the promotion intends to do, etc. The final selection by the ERT’s jury will take into account all the above.

Surprisingly, in the final five, there aren’t names that for many were considered as favorites, proving that the only criterion of ERT is the proposals of the artists and their prospects in the difficult track of Eurovision.

Which artist do you think will be the final choice of ERT and will represent Greece in Eurovision 2022? Tell us in the comments below!

ERT may have been accustomed to official announcements in the past years after the Christmas holidays, but the place in the top ten that Stefania brought to Rotterdam a few months ago whetted the appetite of the managers of the Greek public broadcaster, who want an even better placement in Italy. Thus, in contrast to what happened in previous years, we will soon have the first announcements, while there are many artists who are preparing to claim the Greek representation in Eurovision 2022. We will see all this briefly below.

How will ERT choose the artist and the song?

So far no final decision has been made on how the artist will be selected, but also the song that will represent Greece in the next song contest. Nevertheless, what seems most likely is a process similar to the one followed in 2020. An artistic committee of ERT to examine the proposals that will be submitted and decide on both the performer and the song. The difference with 2020 is that this time the process will be more open and with more publicity, giving the opportunity to any interested party to submit his proposal.

At the end of September, ERT will make the first announcements, giving a deadline of no more than two months, for those interested in wishing to represent Greece in Eurovision 2022. Immediately after, the proposals submitted to the committee will be evaluated and the most appropriate one will be selected. ERT’s goal is that by the end of the year, the Greek entry in the next song contest has been selected, so that there will be plenty of time for the video clip, the setting up of the stage presentation, but also the promotion of the song abroad.

Stefania’s good result this year, after eight years of failures, but also the professionalism shown by the ERT team in this year’s contest, has aroused the interest of many artists. Let us then look at three of them, who have already begun their preparations for claiming Greek representation in Eurovision 2022.

Kalomira wants it very much, but the same desire is shared by her record company Heaven. According to our information, Heaven is preparing a specific proposal in order to submit it to ERT, in a relatively short period of time. Kalomira is not unknown to the friends of the contest, since in 2008 she took the third place for Greece, with My Secret Combination.

Of course, this alone is not enough to bring the sweetest Kalomira back to the contest. ERT should announce the way in which the artist and song will be selected for Eurovision 2022, while of course Kalomira’s proposal should convince the managers of the Greek public television that it will bring a very good result for the country in the music competition, which will take place next May in Italy.

The interest from all the record companies, after this year’s tenth place of Stefania and the way ERT managed the Eurovision project, has reasonably increased and Kalomira is not the only one who is preparing….

Amanda Georgiadi or as she is known, Amanda Tenfjord, is a half Greek artist that lives and works in Norway. After this year’s successful participation with Stefania, ERT will probably want to repeat the successful experiment, sending a talented artist from abroad, thus capturing votes from countries that basically do not vote for Greece (this year Stefania received 10 points of the Dutch televoting).

Through her social networks, Amanda informs us about the fact that she was in the studio, for the recording of new songs. Of course, Eurovisionfun could not help but ask the expatriate, talented songwriter and singer if this recording has anything to do with the Eurovision Song Contest.

Amanda willingly answered us, telling us that she recorded three new songs, one of which is actually intended for Eurovision. She also revealed to us that she will visit Greece in the next months. Specifically, as soon as she performed the second dose of the vaccine, the young artist told us that she would come to Greece, in order to be here in the studio as well.

Many eurofans in Greece would be extremely happy, if Good job Nicky would be the country’s representative in the next Eurovision Song Contest. Nikolas Varthakouris, who as Good Job Nicky has brought fresh air to the Greek music scene, is particularly positive about the possibility of participating in the Eurovision Song Contest, provided of course he finds the right song, which in turn will convince ERT that can be a worthy successor to Stefania and Last Dance.

The interest of Good Job Nicky to participate in Eurovision seems to be confirmed by Ermis (Hermes Geragidis), the composer-producer with whom Nikolas writes all his songs. When asked on Instagram about the possibility of seeing Nicky on the Eurovision stage, Ermis said ignorance laughing, but then nodded in agreement.

Vote in our poll

Of course, the interested artists are not exhausted in the above three names, since as we told you, many will be the ones who will try to claim the Greek representation for Eurovision 2022. But there are definitely three persons that will occupy us in the coming months. Vote in our poll below. Who you would like to represent Greece at Eurovision 2022, send your own message to ERT!

Who do you like to represent Greece at #Eurovision 2022?#ESC #Eurovision2022 #ESC2022 #News #Greece #EurovisionGR #ERT #EurovisionItaly