Following the incident at the Turquoise Carpet, during which Andrea threw North Macedonia’s on the floor. In the video we saw of the vocalist, it does not seem that the singer intended to show disrespect and just wanted to move the flag because of the photo-shoot with the press. However, showing disrespect to national symbols is a crime in North Macedonia, which means Andrea could face legal trouble for her action.

The broadcaster says it has made the decision to remain in the 2022 competition, stating that:

Such a step at a time when all the deadlines for withdrawal have passed would cause great financial damage and other sanctions that should not be neglected. In particular, the cancellation would jeopardize the participation and deviation of the television rights in all other events that MRT receives as a member of the European Broadcasting Network

The Macedonian Radio Television will take all legal decisions and disciplinary measures after the return of our delegation from Turin, after the members will submit reports on the events of the ceremony.

Due to the reporting on the incident within North Macedonia, the broadcaster is considering withdrawing from the event in 2023:

Due to the negative public image Eurovision has brought to the broadcaster, the MRT Editorial Board is considering the possibility that the Macedonian Radio Television will no longer compete in the Eurovision Song Contest from 2023.

Andrea will compete tomorrow in the 11th place of the second semi-final with her entry “Circles”, you can listen to her entry here:

During the Opening Ceremony of the Eurovision Song Contest 2022, Andrea seems to have thrown away a small flag of her country, something that made the public broadcaster mad. The public television of North Macedonia considered even the possibility of Andrea’s withdrawal!

You can see that exact moment in the 56:30 minute of the live broadcast of the opening ceremony:

After the ending of the ceremony, MRT made the following announcement:

MRT condemns this behaviour of our representative in Eurovision 2022, Andrea Koevska, who trew away the flag of our country during the photoshooting of yestarday’s opening ceremony.

The public broadcaster is not responsible for this scandalous behavior of our representative, who showed disrespect for her nation with this move, something that is punishable by the law. MRT is waiting for Andrea’s public apology for this action. We already consider withdrawing the artist from Eurovision so that our channel will not have any further damage. Every possible legal way will be considered for the most severe punishment for this scandal those responsible for our participation in the contest.

However, after a while, through a video, Andrea apologies for her action and highlights that she had no intention of insulting her nation’s flag and that she desires to represent her country with the best way possible.

Below you can watch an exclusive clip of Andrea’s second rehearsal. North Macedonia competes in the second semi final, and performs eleventh in the running order.

The second country to have a go on their first rehearsal for Eurovision Song Contest 2022 is North Macedonia and Andrea with the song “Circles”!

Andrea is relatively new to the world of pop, but her journey has gotten off to a flying start. It was during her younger years living in New York that she developed a keen interest in the gospel, soul and R&B music that surrounded her.

When her family moved back to North Macedonia, she enrolled in Skopje’s Faculty of Music Arts, the country’s leading music school, where she enhanced her burgeoning songwriting skills by learning to play guitar and piano.

This is a really classy, stripped-back performance from Andrea – she’s alone on stage, dressed all in black, supported by nothing more than pulsing graphics and dramatic lighting. 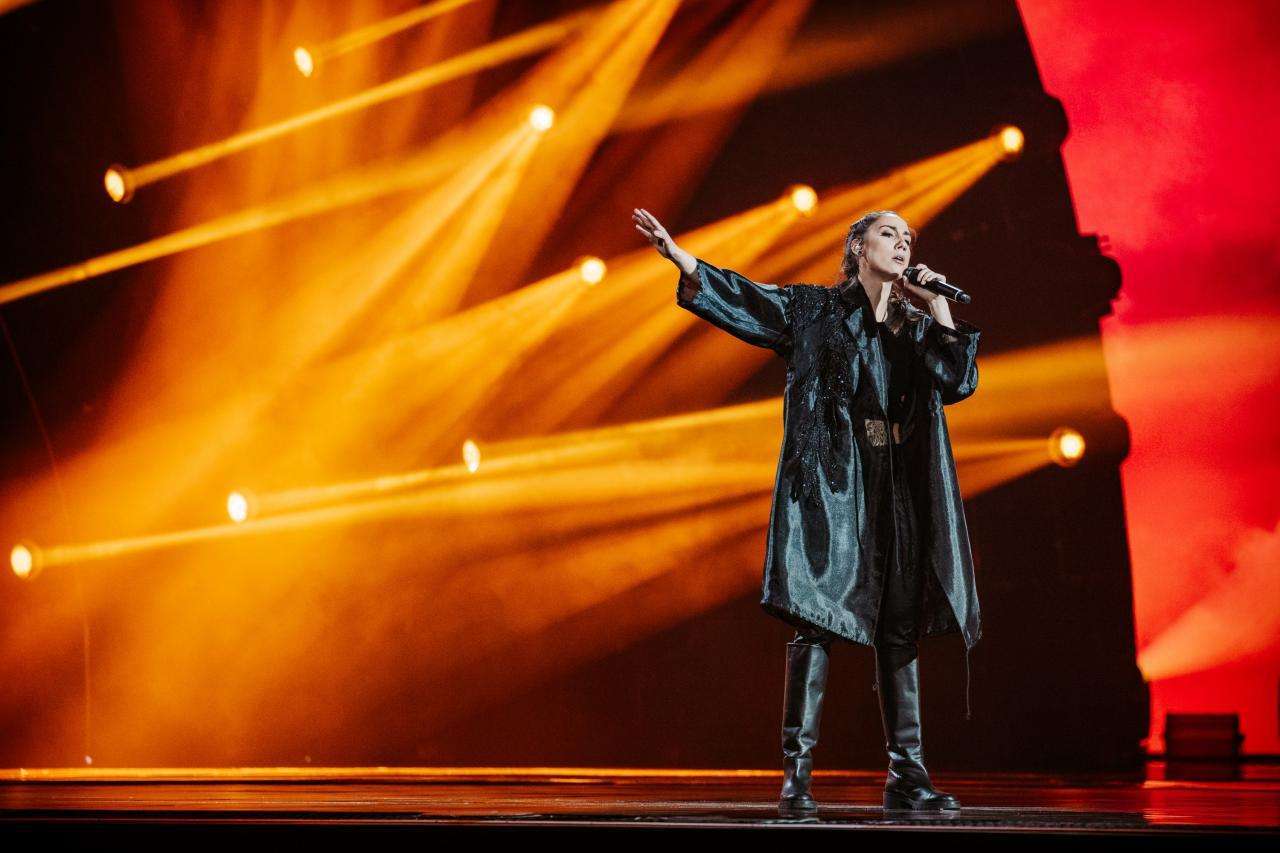 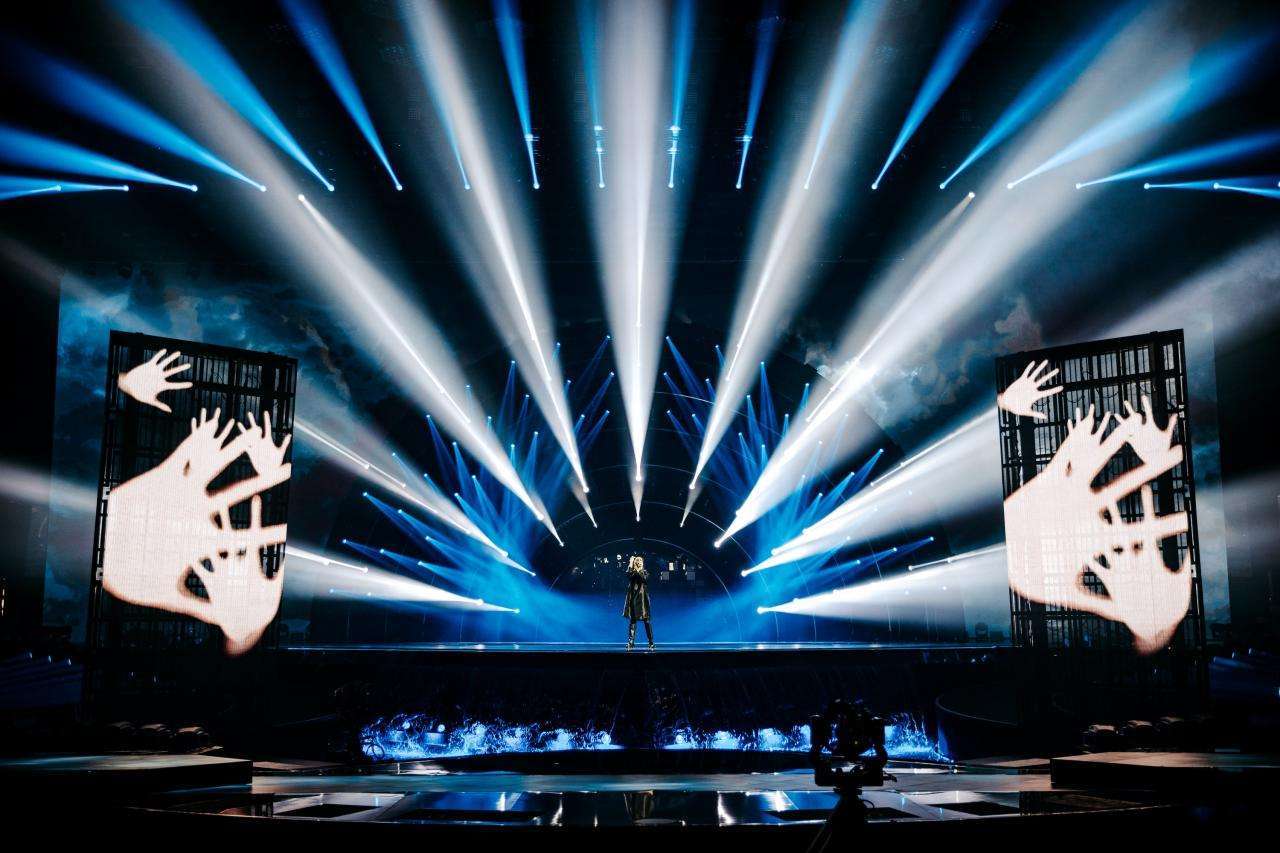 She also uses the lift bridges over the water feature as graphic screens, which is only the second time we’ve seen them used this way so far – Moldova was the first. It’s really impactful, and the staging definitely gives Andrea’s powerful voice space to shine.

Below you can watch a small clip from North Macedonia’s first rehearsal from Tik Tok:

The second rehearsal of North MAcedonia will take place on Friday 6th May and we will have a better idea of ​​what we will see from Andrea on the stage.

The Creative Director for North Macedonia’s performance in Eurovision 2022 will be Biljana Pasharikovska.

This is a very personal matter and we decided that those who know me better should better be part of it. Biljana is a person that not only makes me feel the stage like home, but also supports me and gives me stability. I will not reveal many things about my staging, rather than it is based on my original expression and the movements support it.

She also announced that Ana Petanovska and Renata Kralevska will be her backing vocals in Turin. The two artists are experienced solo singers that have performed in many festivals and concerts in North Macedonia.

The clothes that Andrea will wear in Tyrin will be designed by  Caci Pakovska. Caci is the same designer that designed Andrea’s clothes for the music video

She understands me perfectly and she knows exactly what I want without me saying a single word. She surely is experienced, I believe Caci is the best choice for this performance in front of the whole Europe and the world in general.

As of today, Andrea’s song “Circles” is available in Spotify.

North Macedonia will compete in the second half of the second semi-final in May 12.

Stay tuned on Eurovisionfun for all the news regarding the participation of North Macedonia at the Eurovision Song Contest 2022 in Turin, Italy!

“Circles“, the entry of North Macedonia in Eurovision 2022, underwent a production revamp. The final version of the song, along with the music video, was uploaded on the official Eurovision YouTube channel.

MRT, the Public Broadcaster of North Macedonia, allocated a budget of 2,000 euros to improve the production of the song, after Andrea‘s victory in Za Evrosong, as the country is one of those that offer financial support to their representative after winning their national selection.

Watch the music video of “Circles”:

Andrea won Za Evrosong after a draw with Viktor Apostolovski with a total of 20 points each. Andrea was selected as the winner, having received more points from the jury.

North Macedonia will compete in the second half of the second semifinal on May 12th.

Stay tuned to Eurovisionfun for all the developments regarding the participation of Northern Macedonia in Eurovision 2022!

As we previously informed you, Serbia, Montenegro and Northern Macedonia have recorded their backup appearances for the Eurovision 2022 Song Contest in Belgrade after the end of the national final of Serbia.

An excerpt from the recording of the live-on-tape of Northern Macedonia for Eurovision 2022 was released yesterday afternoon. The country’s delegation released the video from behind the scenes of the recording that took place in Belgrade on Sunday.

What is a live-on-tape performance?

In 2021 all of the 39 acts had to film a backup performance as part of the many contingency measures the EBU has put in place to ensure the song contest can happen in May no matter what.

Each act was able to rehearse for as long as they wish for their live-on-tape performance. However, only three attempts over the course of one hour are given for the filming of the performance which is monitored by the EBU. The participating country can choose which of the three performances is to be used. Live-on-tape recordings were not required to be the same as their planned Eurovision performances.

The live-on-tape performances were later shown a week after Eurovision 2021 during the Eurovision Song Celebration, as a way to showcase all of the hard work put into creating the extra performances.

Here’s the entry of North Macedonia in Eurovision 2022 Song Contest:

Stay tuned to Eurovisionfun for all the news about North Macedonia in Eurovision 2022!

“Circles” the North Macedonian entry for Eurovision 2022 will undergo a production revamp ahead of the contest in Turin, Italy.

MRT the public broadcaster of North Macedonia has allocated a budget of 2,000 Euro to improve the production of the nation’s entry for Eurovision. The budget is part of a package of support that Andrea will be offered following her victory in Za Evrosong on Friday night.

Andrea won Za Evrosong after tieing with Viktor Apostolovski with a total of 20 points each. Andrea was selected as the winner in the tie-break having received more points from the jury,

Here you can listen to the studio version of “Circles” :

Stay tuned to Eurovisionfun for all the latest news regarding the North Macedonian participation in Eurovision 2022!