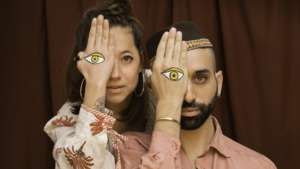 EurovisionFun had the pleasure and honor of hosting Andriamad, in an exclusive interview. Andriamad is a music duo characterized by its pop, electronic and tropical music and consists of Cécile and Kévin. This year, they are going to take part in the national final of France for Eurovision, Eurovision France, c’est vous qui décidez !, with the song “Alléluia“. The final will take place next January and will be organized by France Télévisions in collaboration with the French television station France 2.

First of all, thank you very much for this interview. You are one of the finalists of the French national final for Eurovision 2021. How did you decide to participate and how did you feel after the announcement that you were finally selected?

Hi ! First of all thank you for your support! We decided this year to try the national selection of Eurovision, our goal is to bring people together, this is our way to help the situation, with art, joy, music, positive energy and a message of peace. We are very happy and excited about our choice! This opportunity is amazing for us, it brings a kind of magic in the air.

What does France’s representation at Eurovision mean to you?

We want to represent the open mind of France, the mix of every culture, the respect for the different in a global way. France has always been a hospitable country, so we want to show this part of it.

Tell us more about you. What was the central idea behind the creation of your band?

We met 4 years ago, and the central idea was to combine our personality in music, influence and state of mind. Andriamad is from the beginning a project about sharing, with tolerance and an open mind. In every song we release, we try to put a positive message and we try in our music and on stage, to bring people together.

In Greece, you are popular both for your music and for your covers of popular songs. Have you ever visited or would you like to visit our country?

We would like to do a concert after all this time in Greece, with pleasure! Every time we hear about Greece, we see a very beautiful country. We have already visited Corfu and we loved this island. So we would like to visit the other islands of Greece and of course Greece in general.

So you decided to participate with the song “Alléluia”. What is the meaning of the song? What message do you want to convey to the world with this?

We composed the song a few months ago in our small studio in Paris and we decided to write a peaceful song about the period we have just been through and a song about the open mind, the tolerance and the positive curiosity for others, because this is what we hope most, to bring people together no matter who you are or where you are from. It’s just all these positive vibes we want to give. We also wanted to include a word that can be understood by everyone, and to have the ability to celebrate life with joy, so we chose to sing some “Allléuia” among the lyrics.

Is the video clip of the song in your next plans?

We were already working on the lyric video, which is now available on YouTube! We want to insist on the lyrics of the song and its meaning and give the vibe first with this video. We will now work on everything related to the national final. Maybe after all this we can think of a video clip.

Have you thought about how you would like to present the song in the national final?

COLORFUL AND GENEROUS 🙂 and the rest … a surprise!

This year France won the Junior Eurovision. Is the thought of doubling the victories for the country, in such a difficult year for the whole planet, among your goals?

We are already happy to participate in the competition. Our main goal is to bring people together, to give joy and positive emotions. For us, the main idea is to convey our message with our song. The rest is just an amazing bonus. 😉

In closing, I would like to ask you, what is your favorite song that represented France in the competition?

Ne partez pas sans moi by Celine Dion. She is such an amazing artist and we respect her a lot.

*After the interview, Andriamad send a message to the readers of EurovisionFun*

We warmly thank Andriamad for this interview and we wish them best of luck next year in the national final!

France Télévisions recently announced the 12 artists and the titles of their songs, which will compete in the national final of the country, “Eurovision: C’est vous qui décidez!”. The winner will represent France in the upcoming Eurovision Song Contest in Rotterdam!

Following a process the 12 artists and their songs that will compete for the ticket to Rotterdam are:

You can listen all the songs below. If there isn’t a video from YouTube click the tittle of the song only via your mobile, because its geoblocked in pc.

Cephaz – On A Mangé Le Soleil

The song that will be selected for Eurovision 2021, will be selected by 50% of the television audience and 50% by a professional jury of 10 people. There will be two voting phases, but the public will be in control of both. The jury will consist of 10 people, 5 French and 5 from other countries.

According to Le Parisien, presenters of Eurovision: C’est vous qui décidez! will be Stéphane Bern and Laurence Boccolini.