The “Host City” contest has officially stared! 5 Dutch cities have submitted their bid book to Dutch national broadcast in order to host Eurovision 2020. The 10th of July was the deadline and despite the fact that 9 cities had expressed their desire to host the contest, finally only 5 of them officially submitted for their nomination. These are Rotterdam, Maastricht, Arnhem, Utrecht and Den Bosh. We can already say that Rotterdam and Maastricht are the favorites to earn the title of the “Host City”, but let’s see precisely what each city had to present!

Wethouder Kasmi, the Deputy Mayor of the city brought a suitcase, obviously referring to tourism, while the whole delegation showed its enthusiasm by wearing tourist scarfs! According to Dutch media, Rotterdam has a full-package nomination. Today it was also released the promo video and the slogan of the city: “Rotterdam for real. Rotterdam make it happen!”

The venue that city proposes is the “Ahoy Rotterdam”, which has a capacity of 16.500 people. This city has to offer not only a big budget for the show, but also a good number of hotels to host whoever comes for the Contest! It seems like a good combination for a host city!

Councilor of culture Said Kasmi presented the bid book: “The Eurovision Song Contest is about being yourself, diversity, inclusivity and those are words which describe our city as well with our inhabitants of 175 different nationalities. The Eurovision Song Contest also stands for talent, development and giving that talent a stage. We do the same in Rotterdam. We want to give the viewers an unforgettable memory.” 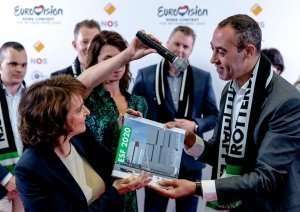 The Mayor of the city, Annemarie Penn-te Strake, presented the bid book accompanied by a Limburgian band showing their great desire to bring the Contest to the north of this country. Maastricht proposes as venue the “MESC Maastricht” with a capacity of 20.000 people and their slogan is: “Come closer”. Furthermore it is planned more cultural events to be held at the same time in the 44 neighborhoods of the city during the Eurovision. It’s about a very important city due to its significance and its history, not to mention the rumors of Maastricht being EBU’s favorite! 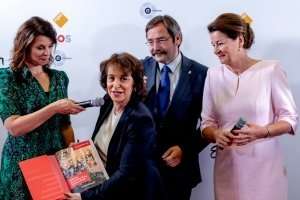 Mayor Ahmed Marcouch presented the bid book, which was wrapped in the same fabric as Duncan Laurence’s clothes which he wore during the 2019 Eurovision Song Contest. The big delegation arrived in a bus advertising city’s nomination. Arnhem has to offer concerts in various roofs and the Vitesse’s stadium “GelreDome”, contemporary stadium which is about to host many games for the “Euro 2020”. The football team claimed that is willing to give the stadium in order Eurovision to be held. 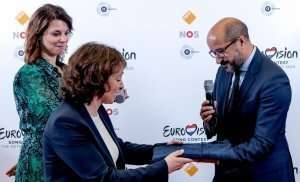 This city may not have many possibilities to host the contest, but they surely found the most impressive way to show their bid book: by a bicycle-courrier! The proposed venue is “Jaarbeurs”, whose capacity is only 11.000 people.

“Utrecht wanted to be playful and different, two words which describe Utrecht perfectly. But also because it is healthy, quirky and sustainable. It suits the city,” said Karen Poot who cycled over 20 kilometers from Utrecht to Hilversum. 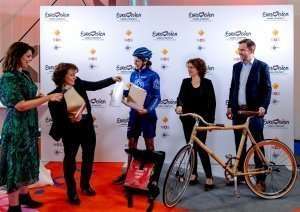 The delegation of this city presented their bid book while offering some traditional treats. The expo centre “Brabanthallen” (capacity 11.000 people) is proposed to host the event, but since city’s budget is only 3 million euros, the lowest of all, it seems like Den Bosh has the least chances for winning over all! 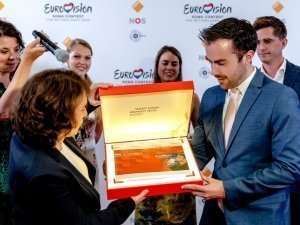 “It is fantastic to see the enthusiasm and attention these five cities have put on their bid books. A huge job that shows how the Netherlands is embracing the Eurovision Song Contest. This is fantastic because we hope that the whole of the Netherlands will experience the Eurovision Song Contest. Regardless of which city will be ultimately chosen: I thank all the cities for the work they have done and I look forward to all the wonderful proposals that are already here for this wonderful event.”

The Eurovision 2020 Core Team, composed by members of the EBU and the Dutch national broadcaster, will evaluate the bid books each city has submitted. During August, this team will visit the five cities in order to see closely what they have to offer. In the end of August is expected to be announced the host city of the Eurovision Song Contest 2020.

Which city is your favorite?