This morning saw the final of Australia’s national selection for Eurovision, “Eurovision – Australia Decides“. Where the winner will earn the right to represent their country at Eurovision 2022, in Turin.

Eleven songs competed in the selection to win the ticket to Turin. The show was presented by Joel Creasy and Myf Warhurst and Dylan Lewis, who is the Green Room host.

The running order for the show was:

• Isaiah Firebrace and Evie Irie – “When I’m With You“

• Alexandra Rotan  (Norwegian representative in Eurovision 2019 as part of KEiiNO)

The jury result determined that Jaguar Jonze was their favourite with 51 points, the full result was: 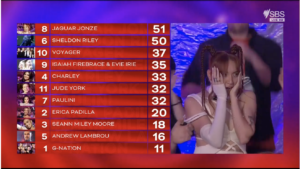 The public voting determined that Voyager was their favourite with 60 points, the full result was: 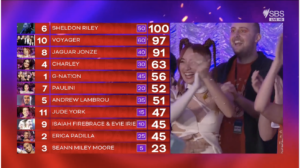 Overall, this means that the winner of Eurovision – Australia Decides with 100 points is Sheldon Riley and he will represent Australia in Eurovision 2022 with the song “Not The Same”.

Do you agree with Australia’s choice? Let us know in the comments. Stay tuned to EurovisionFun for all updates regarding Australia.

Australia will select its representative at Eurovision 2022 tomorrow morning, with the grand final of Australia Decides taking place on Saturday morning.

Eleven artists will compete, with the sole aim of winning a ticket to Turin and the 66th Eurovision Song Contest.

The artists who will take part in the Australian National Final are:

The big winner of Australia Decides and the Australian representative in Eurovision 2022 will be chosen by 50% of the public vote and by 50% of the jury vote.

The jury of the Australian national final consists of:

Presenters of tomorrow’s show will be Joel Creasey and Myf Warhurst.

The grand final of Australia Decides 2022 starts at 10:30 CET and will last three hours. You can watch it through the SBS website by clicking HERE.

On February 26, Australia is about to pick its representative for Eurovision through Australia Decides 2022. A few hours ago the running order of the artists was revealed while since 10:00 p.m. AEST, the Australian public can vote for their favorite artist until Saturday night by sending an SMS. In the Australian final, the public determines 50% of the total result and jury the remaining 50%. 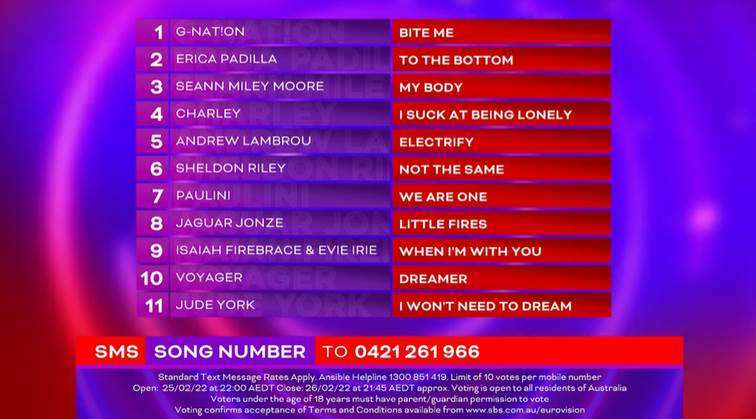 For the first time ever, Eurovision fans around the world will also be able to tune in to watch Eurovision – Australian Decides live with SBS On Demand removing its geo-block for the TV event. The event will be available to stream live on Saturday 26th February at 8.30pm AEDT.

The 11 competing artists are:

A few hours ago the jury members were revealed:

Earlier today, the running order of the Australian National Final, Australia Decides 2022 was announced! Eleven amazing acts will perform for the chance to represent the nation in Turin, in May, with the winner chosen by a jury and public votes.

The artists’ running order is as follows:

Andrew Lambrou is among the contestants who are trying to represent Australia in Eurovision Song Contest 2022! The singer talked exclusively with EurovisionFun and Andreas Papayiannakis abot this journey.

“I wrote this song together with three of my friends a long time ago. I love Greek and general European music and I will love to combine it with my personal sound. I have been watching Eurovision my whole life and the song wasn’t meant to be for the contest at first but I had a vision that it could do for Eurovison and I always had that in the back of my head. First of all, I talked with my label and my family. My father adviced me to do it. So I decided to send it SBS and everything happened very quickly. It’s amazing that I’m in this position right now. I’m very happy with peoples’ reaction from the snippet I released and I really wish that they will love it, I want to put on a smile on their faces!”

When he first started his career, he took part in the Australian edition of X-Factor and now he’s part of Australia Decides:

“Music is in my blood. I’m very happy because I knew what I wanted since I was five years old. Music is part of my life since forever. It’s a way of me being creative. All the experiences I had with music, starting from Music School and then Australia Decides and possibly in Eurovision,they were all amazing.All of them have been stages of my life to make me come here and I’m very gratefull for all those experiences”

Andrew said that it’s an awesome feeling imagining himself in the Eurovision stage because the contest is a great way to communicate many different type of music styles from many countries, many languages to be heard all over the world and he would feel really grateful if we would manage to win Australia Decides.

He also talked about his stage perfomance on the national final:

“We are preparing everything that we will be doing with the staging. I’m very into visual effects and I’m trying to visualize everything I have in my mind. I can’t say much but it will be something original and amusing for the viewers. Of course there will be a choreography“

Andrew also sang a part of his song “Electrify“ for us and you can hear it at the end of the video.

EurovisionFun wishes all the best of luck to Andrew Lambrou!