You are here: Home1 / News2 / Birmingham

Birmingham was eliminated from the host city selection procces and now the Mayor of West Midlands has revealed the reason that lead to this decision.

Andy Street, the Mayor of the West Midlands, explained on his personal Twitter account the reason behind Birmingham’s not advancing  to the final two of the host city race for Eurovision 2023. Mr. Street explained that the Resorts World Arena also known as the NEC did not meet the technical requirements for the roof of a venue to host the Eurovision Song Contest.

Birmingham hasn’t made the Eurovision runoff due to a technical issue around the venue’s roof height.

An incredibly frustrating reason to miss out – not least because of the solutions the NEC put forward.

We gave it our all, and will continue to bid for the biggest events.

Glasgow and Liverpool are the two cities that remain in the selection procces and one of them will be the winner city to host Eurovision Song Contest 2023. The EBU and the BBC announced earlier today the two cities that move to the final phase and the five that were eliminated. The cities which were not selected were:

Eurovision 2023 will be hosted in the United Kingdom after Kalush Orchestra won with the song “Stefania” on behalf of Ukraine.

Stay tuned on Eurovisionfun for all the news regarding the Eurovision Song Contest 2023, in the United Kingdom!

Imaani who nearly won the Eurovision Song Contest says she is “backing Birmingham” to host the 2023 event.

Imaani finished as runner-up to Dana International when the competition was last held in the city in 1998.

The winning city is expected to be announced by the BBC and Eurovision organisers in the next few weeks.

Imaani finished seven points behind the Israeli winner 24 years ago, the year after Katrina and the Waves won with their UK entry Love Shine A Light. Until Sam Ryder’s stellar performance at this year’s contest in Turin, Italy, she was the UK’s most recent runner-up.

She remembers feeling “absolute terror” during the dress rehearsal for her song Where Are You?, at the city’s National Indoor Arena.

“My management team drew lots over who was going to come down and tell me off for crying,” she told the BBC. “I was just so scared.”

Despite this, the singer has fond memories of the atmosphere in Birmingham during the live show.

“It was massive. Amazing band and the crowd was incredible. Such a huge building, it was amazing, a phenomenal experience,” she said.

“There’s no doubt in my mind that Birmingham could do it again. And a thousand times better than they did it before – and they did a pretty damn good job when I was there. I’m backing Birmingham.”

If it wins, Birmingham will host the event at the 15,685-capacity Resorts World Arena.

Glasgow, Leeds, Liverpool, Manchester, Newcastle and Sheffield are also hoping to stage the event, in May.

“We saw during the Commonwealth Games people here in Birmingham rediscovering their pride and their confidence in their city and realising that Birmingham can do these major international events as well as any other city anywhere in the world,” he said.

“The city just came to life, it came to life for the whole month because we had the G8 just afterwards… so it was just a wonderful month,” he said.

“He likes Eurovision more than me,” joked partner Kevin.

We have already reported that the decision about the Host City Eurovision 2023 will be announced in the Fall. What we didn’t know is how lengthy and elaborative BBC’s process really is. A recent discussion, however, between Liverpool Echo and Cllr Harry Doyle (a Liverpool city official) has shed some light into the procedure and give us a full picture of the BBC’s roadmap.

According to Liverpool Echo, the seven shortlisted cities must now provide BBC with their complete bids until September the 8th.

After an initial examination of the submitted bids, BBC will pay a visit to all the aspirant host cities (during September), in order to inspect the arenas and cities’ infrastructure.

Following the local inspection, BBC will once again deliberate, together with EBU, having this time all the necessary information to make the best choice. As a Liverpool city official maintains the final decision concerning the Eurovision 2023 Host City will be made public in late September or early October.

Stay tuned for all the updates regarding Eurovision 2023 and the Host City bid race!

Following the BBC’s announcement of the shortlist of cities on 12th August, one aspirant organising city has become bookies’ absolute favourite to host ESC. Glasgow, albeit being ahead of competition from the very beginning, has now managed to crystallise its position, according to the betting odds, securing an overwhelming 52% chance of holding the event! 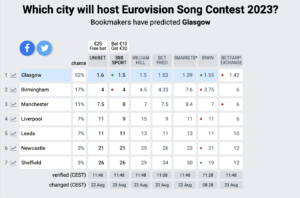 Interestingly, Glasgow has more than doubled its chances to host ESC since August the 11th, a day before the official announcement of the shortlisted cities. Birmingham and Manchester are the bookies’ second and third favourite, with 17% and 11% chance of hosting ESC respectively, having no considerable fluctuations in the betting odds over the last three weeks. 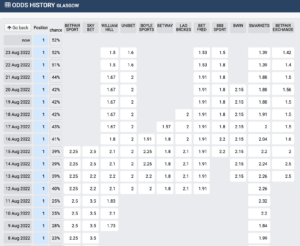 However, the Host City bid race is far from over. The seven shortlisted cities have now entered the first stage of the two stage bidding process. In the second stage, the cities will be narrowed down to two, and one will prevail and take over hosting duties from Turin, ESC 2022 Host City.

Have the bookies correctly predicted the Eurovision 2023 Host City? Which other city could possibly intercept Glasgow’s victorious course?

We don’t often get to see a National Broadcaster publishing FAQ for the Host City bidding process. Actually, we think, that’s a first! BBC has probably been overwhelmed by messages from officials all over UK, and has responded to it with the most British way possible, namely by issuing a Frequently Asked Questions document that briefly summarises the process. You can view the FAQs below:

How do you apply to be a Host City?

Any local authority interested in becoming a Host City can email esc.hostcity@bbc.co.uk

Does it cost to enter a bid?

There is no charge to enter a bid. It is up to Cities whether they incur costs to support their bid.

Who decides who will be the Host City?

The selection of the Host City for the Eurovision Song Contest 2023 will be determined by the BBC and the EBU.

How does the process work?

It is a two-stage process and to be considered, any potential candidates must meet a set of minimum standards that demonstrate they have the capacity, capability and experience to host an event of this scale and complexity.

What are the key requirements?

For example, last year the EBU’s Host City criteria was based on providing a venue able to accommodate at least 10,000 spectators (as well as a press centre), that should be within easy reach of an international airport and with ample hotel accommodation.

Will there be different rounds?

There will be two rounds. Once we have received applications, we will shortlist cities based on their ability to meet the requirements and their responses around capability and experience.

Will the government have a say on who hosts it?

We may consult with the UK government but the decision on who will be the Host City will be determined by the BBC and the EBU.

When will you announce the Host City?

We expect the process to be completed in Autumn and we will announce the successful Host City then.

Which shall be the Eurovision 2023 Host City? Stay tuned for updates!

One after the other, the British cities interested in hosting the 67th Eurovision Song Contest submit their proposals for the holding of Eurovision 2023. Today it is the turn of Birmingham, which in 1998 hosted the last contest on British soil.

Should the BBC and EBU go ahead with Birmingham’s choice, Eurovision 2023 will be held at the Resorts World Arena rather than the Utilita Arena Birmingham. The West Midlands city has two indoor stadiums that are able to host the Eurovision Song Contest.

Nevertheless, the Birmingham City Council ended up choosing the Resorts World Arena, which is available until the end of June next year. This means Utilita Arena Birmingham will not have the chance to become one of the few arenas to have hosted Eurovision more than once.

Many music events have been hosted at Resorts World Arena, such as the BBC Music Awards in 2015 and most recently the ITV Charity Concert for Ukraine where Eurovision 2016 winner Jamala performed her winning song “1944”. Resorts World Arena has a capacity of 15,685 spectators.

Birmingham’s bid is backed by West Midlands Mayor Andy Street and Birmingham City Council leader Ian Ward. The mayor of the UK’s second largest city wants his city to host both the next Eurovision Song Contest and the 2026 European Athletics Championships in addition to the Commonwealth Games starting tomorrow.

The following cities have confirmed that work has begun on their proposals:

While the following cities have already indicated their intention to submit their own proposals: