Finnish broadcaster Yle announced the return of UMK to select their Eurovision representative for Turin.

UMK will take place in the city of Turku on February 26, 2022.  During the night, the Finnish audience will decide together with an international jury who will succeed Blind Channel.

For next year’s Finnish national final Yle received 312 entries with more than 1000 songwriters taking part in the process.  According to the public broadcaster, after the huge success of Blind Channel.  However, only seven songs will make it to the final.

The selection process will be very competitive with a variety of acts reveals Ylex head of music Tapio Hakanen.

The artist lineup chosen for this year’s UMK contest is the most extensive ever. The entrants include emerging pop-stars who have been successful on streaming services, promising international export talent, an artist known to all Finns, including an artist who has appeared on a very well known music programme, a long-standing favourite whose career stretches from the 80s to today, and new names who enjoy high praise from the music industry. There was a clear increase in the number of rock band entrants, and we will see explosive rock energy also in the final. Now, viewers can finally experience the excitement of UMK also in a live event.

For the 2022 national selection UMK will return to a live event format.  In 2021, due to health concerns the Finnish national final was a televised only event.

Yle will reveal the name of the contestants on wednesday January 12.  After that each song will be revealed one every day starting from January 13.

Blind Channel represented Finland in Rotterdam for the Eurovision Song Contest.  Their song Dark Side ended in sixth place in the final, Finnish best result since their Eurovision victory in 2006.  After their success Dark Side became one of the most streamed Finnish songs of all time.

Blind Channel, the metal rock band, which is the big favorite to represent Finland in Eurovision 2021, opened its papers at Eurovision Buddies! They explain the meaning of the Dark Side, the reasons that led them to participate in UMK 2021, but also their goal in Eurovision, if of course they are selected. Although they say they can not reveal much about their stage appearance, they claim that it will be explosive and will be the biggest thing they have ever done!

Dark Side is very different from what other artists have. That’s why it has become so successful and I really like it!

The – so far – situation has been overturned by the release of the Blind Channel song for UMK 2021. The unique heavy metal sound of “Dark Side” has raised Finland to the top of the bets.

Counting almost 115,000 views after its first 21 hours of release, Blind Channel’s participation managed to dethrone the artists who were going to participate in Eurovision 2020 from the top of the betting predictions.

As of noon, Iceland, Bulgaria, Lithuania and Russia were at the top of the betting table. The first two have already chosen their representatives last year, Lithuania is waiting for the song of The Roop and Russia is very likely to recruit the unconventional Little Big for another year. 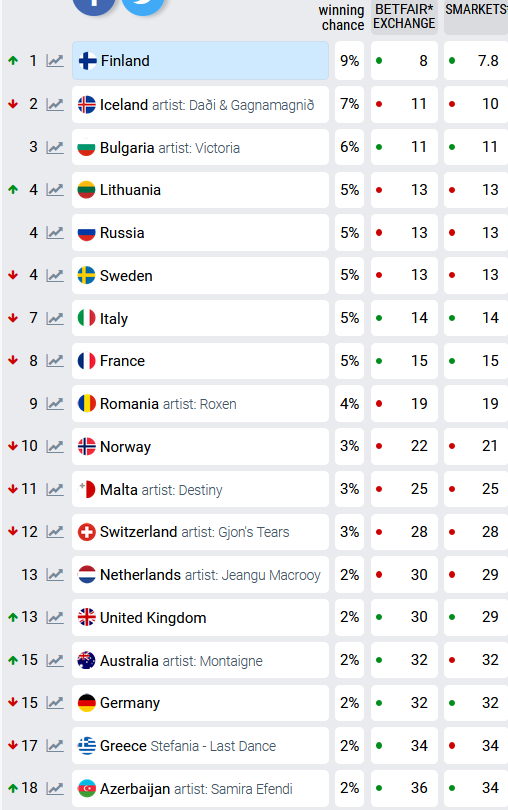 Within hours, the Nordic country saw its winning odds fall from 30 to 8, climbing to the top of the list of the two betting companies currently providing odds for winning Eurovision 2021.

Of course, we should not ignore the fact that both companies are not purely bookmakers, but odds exchange. In these exchanges, everyone interested bets against other players and not against the platforms.

The sharp drop in Finland’s performance just hours after the official release of the Blind Channel song clearly shows a trend, with fans of the contest wanting Finland to return to its rock roots.

And with the popular band “Suomi” have this very opportunity, to give the Eurovision audience a sound that has been missed a lot from the competition.

Whether Blind Channel will eventually prevail in the Finnish national final and represent their country in the 65th Pan-European Song Contest is unknown. However, the chances are on their side and possibly their dynamics will allow Finland to return to the top ten for the first time since 2006 and the victory of the Lordi in Athens.

The sixth song of UMK 2021 leaked on the internet. This is the Blind Channel song, Dark Side, a metal rock song.

You can listen to the song HERE

At 12 tonight it will be released normally from the YLE channel: