The live-on-tape of the countries that participated in the 66th Eurovision Song Contest in May in Turin will be shown this year through the official Eurovision channel on YouTube.

From June 14 to 23, Eurofans will have the opportunity to watch the live-on-tape appearances of about thirty of the forty countries that took part in this year’s contest. Yesterday was the first day of the live-on-tape screening and, thus, we had the opportunity to watch the alternative appearances of Albania, Latvia and Lithuania.

We remind you that while we were normally going to see the live-on-tape of Ukraine, the Ukrainian delegation was excluded from the creation of live-on-tape due to the ongoing war on Ukrainian territory since the end of February.

The three Live-on-Tapes will be released one every thirty minutes from 16:00 to 17:00 CET.

What do you think about the first Live-on-Tape videos of Eurovision 2022? Do you like them or do you prefer the live performances?

For another year Slovenia picked their representative for Eurovision through their national final, EMA. For the second time, the selection process started a few weeks before, as EMA Freš, a contest for young and upcoming Slovenian artists, took place this year as well.

A few hours ago, through the official Facebook page of EMA, the complete results of EMA Freš as well as EMA 2022 that took place last night.

In the first phase of EMA Freš, young artists competed in duels and a weekly final. The results were decided from the public. 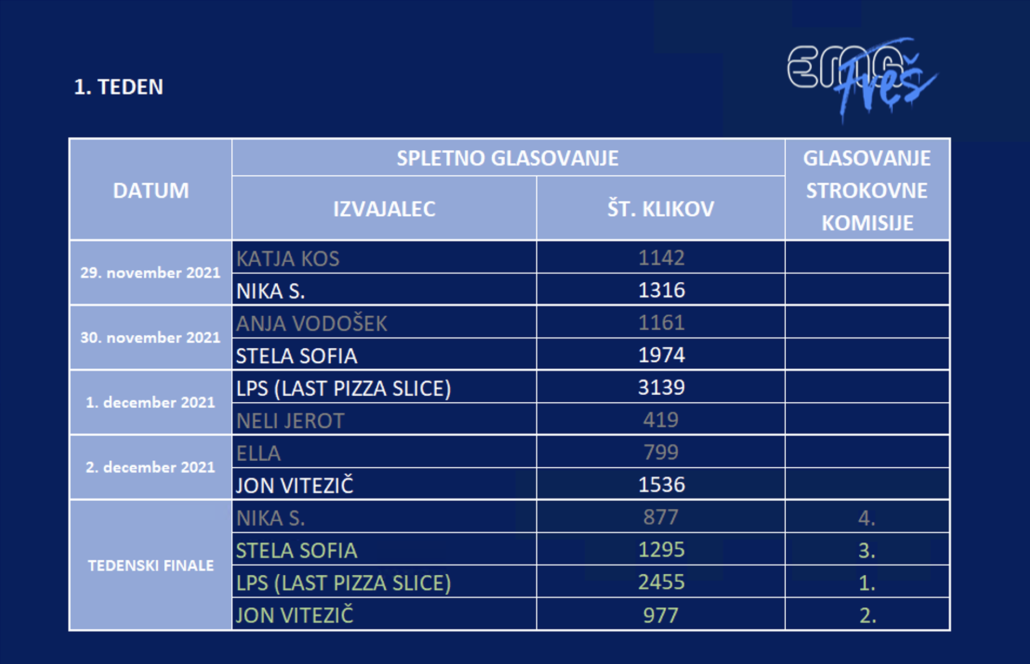 In the final of EMA Freš 2022 there were juries that decided two of the four finalists of EMA. They were no others than LUMA and LPS. The other two, Stela Sofia and Leya Leanne, were decided by the public. 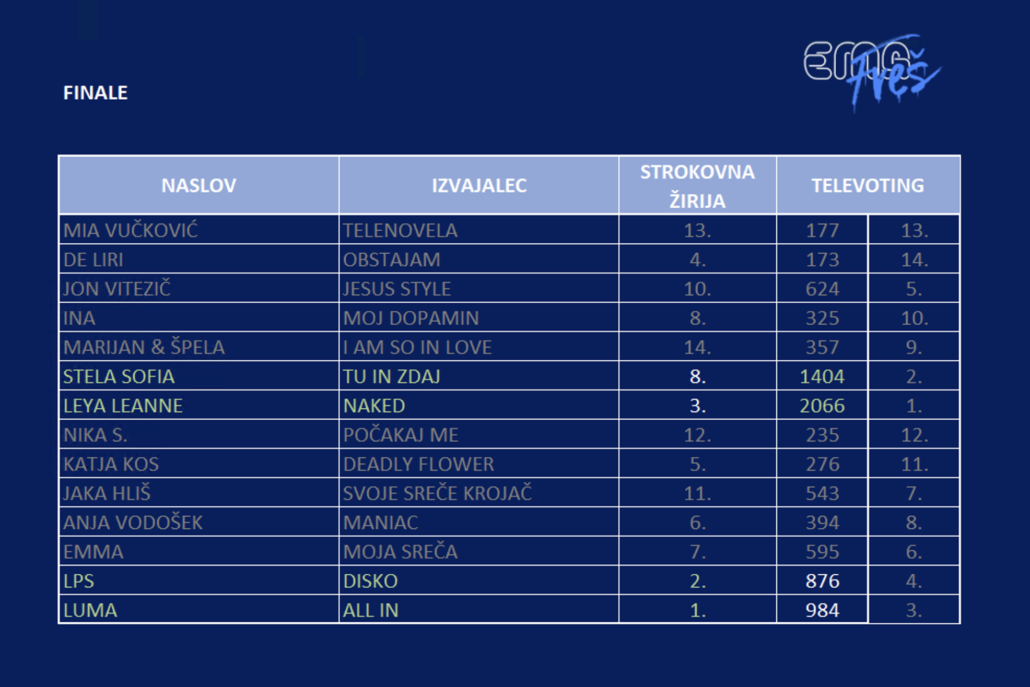 In the semi-finals, six of the ten artists in total qualify for the Grand Final. Jury and public picked three artists each. 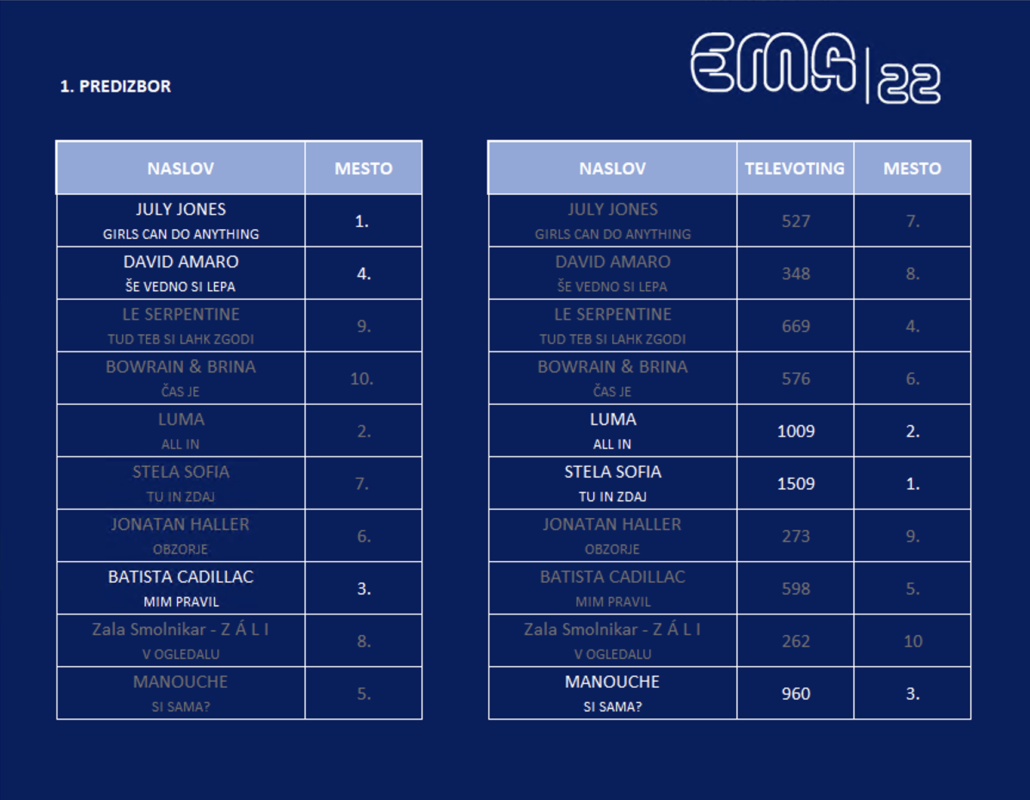 LPS won the public vote with a difference of 700 votes from the second place, BQL. 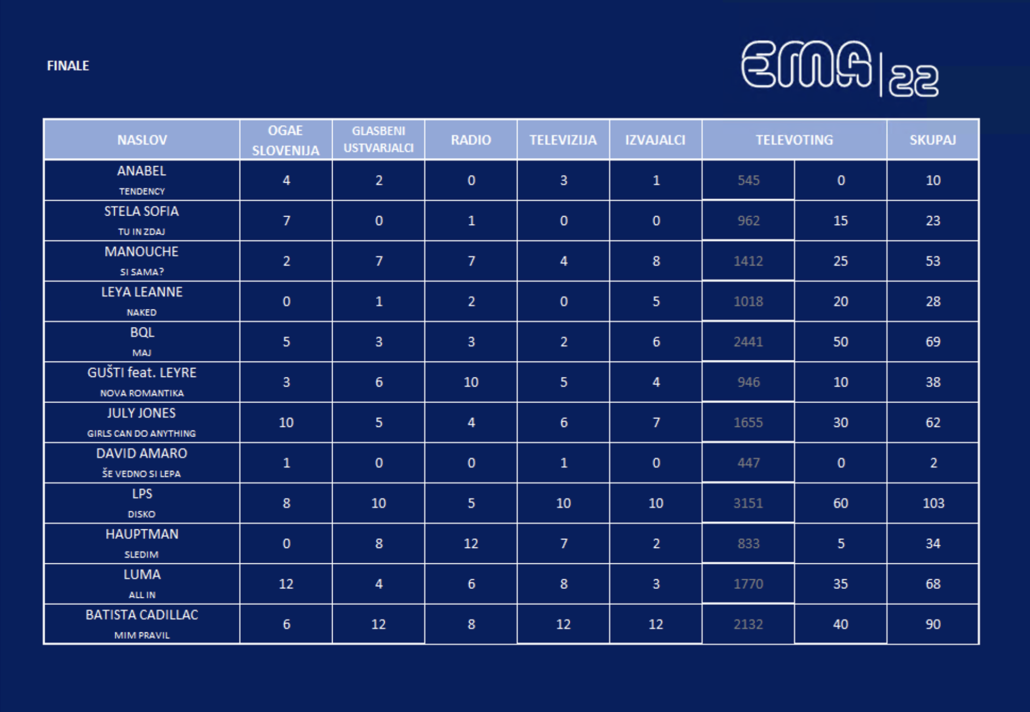 Winners of EMA 2022 were LPS with the song “Disko”. Slovenia will compete in the first half of the second semi-final on May 10.

EMA 2022: last act! One week after the second semifinal of the Slovenian national final, the grand final of EMA 2022 is taking place today, in which the representative of Slovenia in Eurovision 2022 will be chosen.

EMA 2022 consists of two semifinals and one final. In each semifinal, eight artists and two artists from EMA FREŠ competed for qualification to the final. The public vote selected three of the finalists and the jury selected the other three. In the final, a five-member jury (50%) and the public (50%) will decide which of the 12 finalists will represent Slovenia in Turin.

Twelve artists will take part in tonight’s grand final of EMA 2022, all aiming for the victory. These artists are:

The second semifinal of EMA 2022 will start at 20:20 CET and will last two hours. You can watch it on the TV SLO 1 frequency by clicking HERE.

One week after the completion of the EMA Fres, the EMA 2022 officially begins, through which Slovenia will choose its representative at Eurovision 2022.

EMA 2022 starts tonight with the first of the two semifinals, from which the first six finalists of the grand final of February 19 will emerge.

We remind you that EMA 2022 will consist of two semifinals and a final. In each semifinal, eight artists and two artists from EMA FREŠ will compete for qualification to the final of the Slovenian national selection. The public vote will select the three finalists and the jury will select the other three. In the final, a five-member committee (50%) and the public (50%) will decide which of the 12 finalists will represent Slovenia in Turin.

Ten artists will compete tonight in the first semifinal of EMA 2022, with six of them advancing to the grand final of the Slovenian national selection. Tonight’s contestants are: