The French national final “France, C’est Vous Qui Decidez” has just been completed, with the French duo Alvan & Ahez winning and taking over the country’s representation in Turin, in May.

Singing the “Fulenn“, the duo emerged as the winner of the competition and now declare their readiness to represent France in the 66th Eurovision Song Contest.

Here is their winning performance:

On a quite beautiful French night, 12 artists claimed the ticket to Turin. These were:

The final consisted of two rounds. In the first round all 12 artists performed their entries claiming the public vote, which would qualify them in the second round. Those who won the favor of the public were Marius, Alvan & Ahez, Elliott, Pauline Chagne & SOA. The sixth artist to qualify, Cyprien Zeni, was selected by the jury.

In the second round, the winners performed their songs again with the final result being formed 50% by the vote of the audience and 50% by the jury, thus giving the victory to Alvan & Ahez. The duo had a last battle with Pauline Chagne who was the 2nd fans’ favorite.

The jury was consisted of :

In 2021, France was represented by Barbara Pravi and the song “Voila“, taking the 2nd place in Rotterdam!

We remind you that France is auto-qualified in the Grand Final in May 14th.

After a period of mystery, the French public broadcaster is holding tonight Eurovision France: C’est Vous Qui Décidez 2022, through which the French representative at Eurovision 2022 will be selected.

Twelve artists will take part in tonight’s French national final. These artists are:

C’est Vous Qui Decidez 2022 will take place in two rounds. In the first round, the twelve artists will perform their entries. The public vote will then determine the five artists who will qualify for the second round. The jury will select another performer to participate in the second round. In the second round the voting will be 50/50 and the winner will represent France in Eurovision 2022!

The jury consists of 10 people:

The French national final starts at 21:05 CET and will last two and a half hours. You can watch it on the TV5 Europe frequency or on the France 2 website by clicking HERE.

Stay tuned to Eurovisionfun for all the developments regarding France’s participation in Eurovision 2022!

After a period of mystery and speculations, the national public broadcaster of France finally released the final list of the candidate participants and their songs for Eurovision France: C’est Vous Qui Décidez 2022!

France 2 received more than 1500 songs out of which 12 were selected to take part at the national final.

The candidates who are about to claim the representation of France in Turin, Italy are as follows:

The show consists of 3 stages: The top 5 songs of the public of the first stage will advance to the second stage of the selection, where a 6th entry will join them decided by the jury. On the final stage, there is going to be a 50/50 voting process (jury voting and televoting) which will determine the next representative of France in Eurovision 2022. 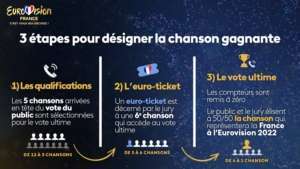 The jury panel consist of 10 members: 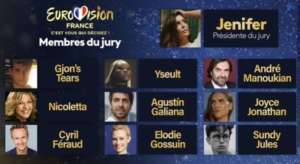 In 2021 France was closer than ever to the victory at the contest with Barbara Pravi and Voilà! She finished second with 499 points.

Stay tuned on Eurovisionfun.com for all the news regarding the French participation at the upcoming Eurovision Song Contest in Turin, Italy.

After a long period of silence, Alexandra Redde-Amiel announced today that the candidates for french national final Eurovision France: C’est vous qui décidez 2022 will be revealed on Wednesday, February 16th!

France came very close to the victory in 2021 with Barbara Pravi and Voilà. The artist finished in second place with 499 points.

Are there any artists you’d particularly like to see in the French national final? Tell us in the comments!

Stay tuned to Eurovisionfun for all news regarding the French participation in Eurovision 2022!