Tag Archive for: festivali i kenges

You are here: Home1 / News2 / festivali i kenges

The 61st edition of Festivali i Këngës, the Albanian festival through which the country’s representative in the Eurovision Song Contest is selected, will take place in December. Changes to the festival are expected, for example the addition of televoting to determine the final result, but are not officially confirmed yet.

When it comes to participants, an artist which regularly takes part in the contest revealed that he will not return this year. MIRUD, who participated 8 times in FiK, tweeted about his decision:

I won’t be participating in FIK this year due to my other obligations with another festival l have already signed a contract with. I will still go to ESC though for another country. 🔥💪🏼 I’m very excited to share further news with you all 🤍

There is no information as with which country MIRUD has signed a contract. There are comments online that San Marino is the country that he is referring to, however on the list of countries that participants of Una Voce Per San Marino come from, Albania is not mentioned.

The traditionally first Eurovision pre-selection national final of the season, is going to experience something no less than a revolution. The Albanian national broadcaster RTSH decided to add the possibility of televoting in Festivali i Këngës 61. This means that Albanian TV viewers will be able to have a word for who is going to represent them at Eurovision Song Contest 2023 that will take place at United Kingdom. However, the percentage that televoting points will hold for the final score of each participant is still unknown. Last time that televoting was used in FiK was at 2016 (for the selection of the Albanian representative for Eurovision 2017) and held 1/13 of the final result, while jury voting held 12/13. Televoting was used for the first time in FiK at 2005, for the selection of the Eurovision 2006 Albanian representative.

As announced earlier in August, Festivali i Këngës 61 will be presented by one of the most loved Albanian TV personalities, Arbana Osmani, while the art director will be Flori Mumajesi, one of the most successful songwriters of the new generation. RTSH has opened song submissions for FiK 61 since June 3rd, while the shows’ dates are yet to be announced. The submission window will be opened until September 30th.

Ronela Hajati won FiK 60 with the ethnic-pop song “Sekret”. It is quite rare for such a song to win FiK, that’s why it’s the first FiK winner of that kind for the first time in many years. She represented Albania in Eurovision 2022 and couldn’t manage to progress in the Grand Final, finishing 12th in the First Semi-Final.

We had a sharp statement from Alban Ramosaj, second in the last FiK, although a big favorite for the victory and the representation of Albania in Turin. The young artist, answering to his fans, whether he would participate in FiK again, answered categorically no, saying that he would only do so if the communists on its jury left! 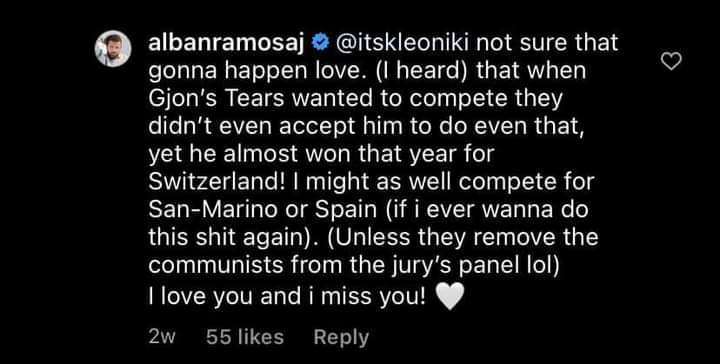 Alban noted that it would be easier to claim the representation of San Marino or Spain than to submit participation in FiK again. He even reminded his followers that even Gjon’s Tears, who was about to win Eurovision, refused his song in Albania and so he finally submitted his entry to Switzerland.

Would he have better luck than Ronela in Turin?

Live snippets from the rehearsals of the two favorites of Festivali i Këngës 2021 have been available since yesterday and earlier today.

Yesterday, on December 13th, a snippet from the rehearsal of Alban Ramosaj was posted, one of the candidates for the representation of Albania with the song “Theje”.

Later today, a snippet from the rehearsal of Ronela Hajati was uploaded today performing her entry “Sekret” which you can watch below:

SHE IS COMING FOR THE JURY VOTES OMG @RonelaHajati #Fik60 pic.twitter.com/3F7MRPYuXF

The 60th Festivali i Këngës is going to take place on 27, 28 and 29 December 2021 while the presentation will be undertaken by Ardit Gjebrea, Jonida Maliqi, Xhemi Shehu, Klevi Kadilli and Isli Islami.

Last year, Albania was represented by Anxhela Peristeri and the song “Karma”, which qualified last as it finished 10th in the 2nd Semifinal, while in the final it ended up in 21st place with 57 points.

In case one of the two aforementioned candidates wins the upcoming Albanian national selection, is it possible for Albania to achieve a better placing at Eurovision Song Contest 2022 in Turin, Italy? Let us know in the comments.

Stay tuned on Eurovisionfun.com for the latest news regarding Albania, and the rest of the 40 nations of Eurovision 2022.

After her victory at Albania’s national final, Festivali i Këngës, Anxhela Peristeri gave her first short interview to the reporter of the public broadcaster RTSH.

Among others she mentioned how happy and emotional feels and that representing Albania in the Eurovision Song Contest was one of her dreams.

As far as the final form of her entry is concerned, Anxhela Peristeri commented that they haven’t made their minds up regarding the language yet (whether it is going to be in English or in Albanian) since her team was focused on the Festivali i Këngës. Moreover, she left open the possibility that there might be some changes at the lyrics.

Albania’s public broadcaster,RTSH, will choose the song and the artist that will represent it in the Eurovision 2020 contest through the country’s historic « Festivali i Kenges » , as it does every year since 2004 when it made its debut in the competition.  The submission deadline for the FiK 2019, to be held sometime at the end of this year, began today and ends on 15 September.

Through FiK 2019 the representative of Albania in the Netherlands

Albania wants to continue its series of qualifying to Eurovision finals also in 2020 in the Netherlands.  After two qualifications in 2018 and 2019, the next representative will be called upon to do something better and,why not, bring Albania to the top10 after eight whole years.

Already, a very popular artist living in US,is rumored to be preparing the participation in FiK 2019. It is about Arilena Ari, which we mentioned in a previous article.

Interested parties can send their applications electronically to festival@rtsh.al or in person at the headquarters of Albania’s public broadcaster in Tirana.  More regulations for FiK 2019 were not released, although this year’s winner is expected to be featured only by the jury vote.

Albania in the Eurovision Song Contest

Albania’s maiden participation in the contest took place in 2004, winning the seventh place. Since then the country has been participated 15 more times, with moderate results.  The country became known in the contest for female ballads with demanding vocals.  In 2012, Rona Nishliu with « Suus », won the fifth place, which is up to now the best position of Albania in the ESC.

This year, in Tel Aviv, Jonida Maliqi with « Ktheju tokës », the song which won in FiK 2018, brought Albania to the final, winning the 17th place with 90 points.