Coming up is Poland, one of the odds’ favourite to win Eurovision 2022. Poland didn’t seem to impress on the first rehearsal, as they start falling places at the odds. During his first rehearsal, Ochman appeared in a black suit and four dancers in black clothes and masks, while the fringing gives an ethereal feeling and movement on stage, as if ghosts are circling Ochman. This scene was combined with flashing lights. Will Ochman impress this time with his second rehearsal?

Poland’s rehearsal starts with a wide shot from above and with black-dark blue lighting, the sound of water adds on to the atmosphere. Ochman is vocally perfect. During the second verse, there are graphics with water drops displaying on screen. In the second chorus, the graphics shake and give an earthquake effect with lightnings. The dancers, who are shown at the beginning standing on the B stage, join Ochman on the main stage. The performance is atmospheric and powerful with excellent use of lights. His face expressions are quite clumsy, but it’s a sure qualification for Poland. 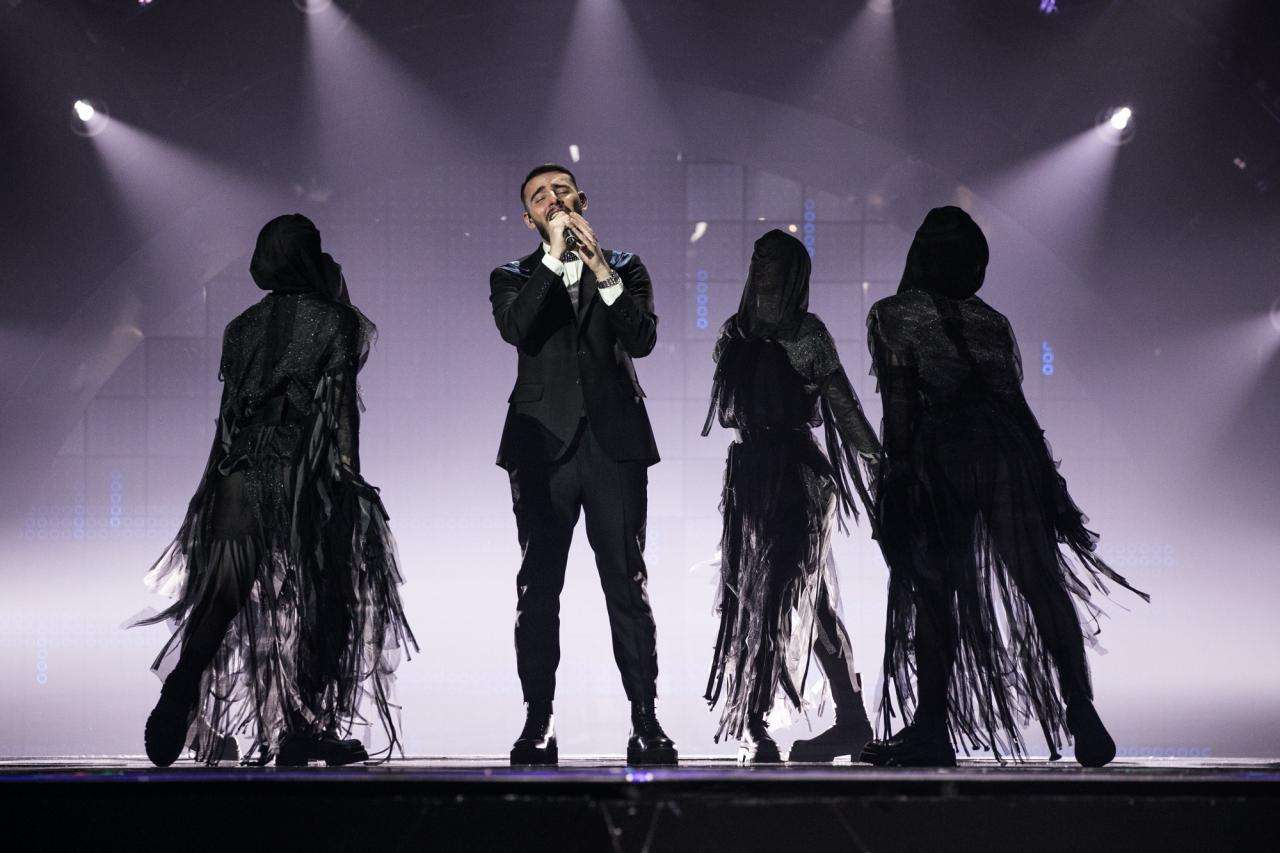 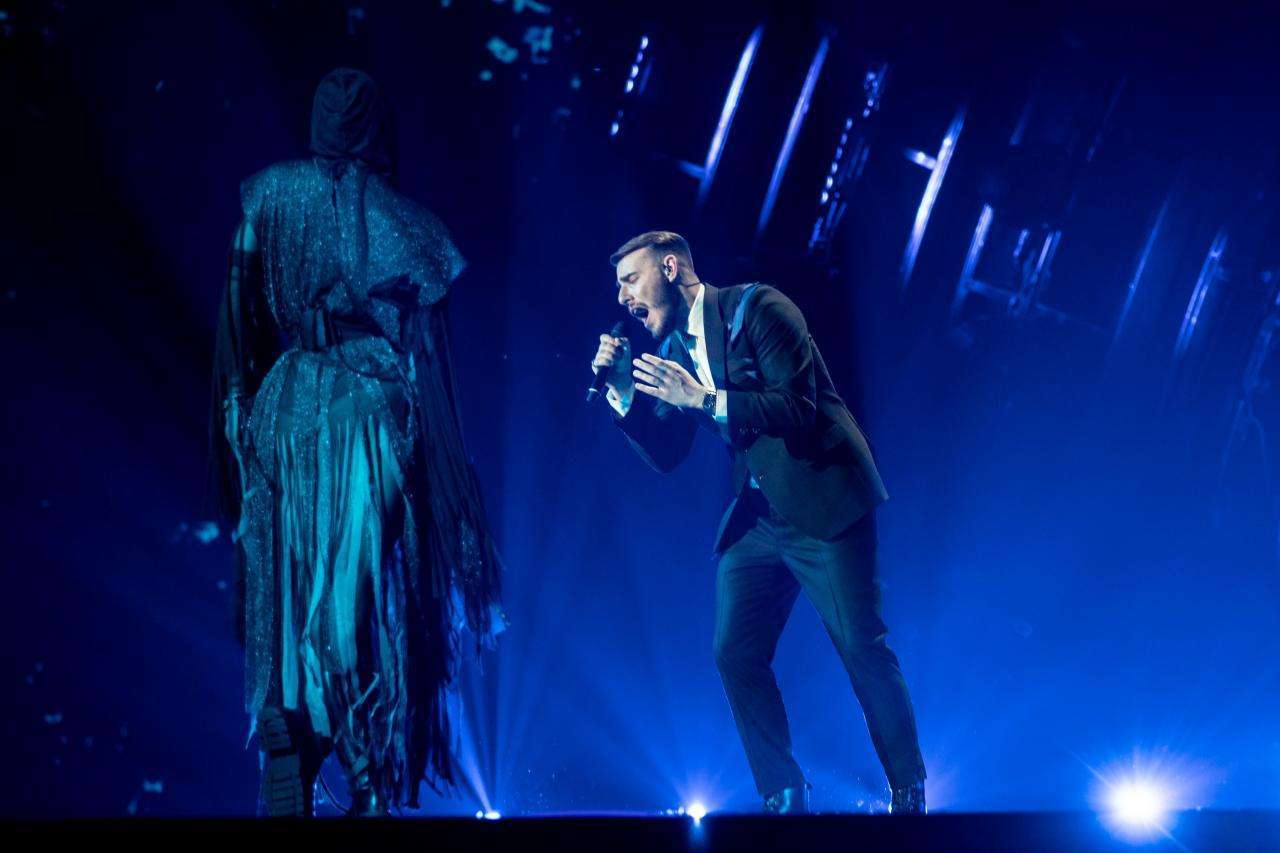 Poland is one of the six countries that will pick their artist who will represent Poland in Turin tonight. Broadcast live from TVP’s studios in Warsaw, Eurofans everywhere around the globe will be able to watch the grand final of Tu bije serce Europy.

The betting odds of Tu bije serce Europy are as follows:

In a low-level national final, Krystian Ochman seems to be the huge favourite, at least according to the bookmakers. Daria is next, with a big gap in second place. 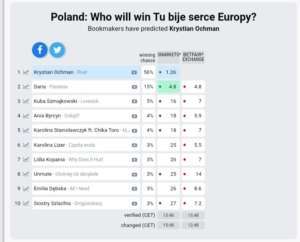 Ten artists will compete and their main aim is to win the 66th Eurovision Song Contest. The artists who will participate in the Polish national final are:

The song and the artist who will represent Poland in Turin will be chosen – initially – by a combination of the votes of the jury (50%) and the public (50%). The public and jury vote will result in the top three, who will go on to claim victory in the second round. The result of the second round will be based solely on the public vote.

The presenters of Tu bije serce Europy will be last year’s representative of Poland at Eurovision 2021, Rafał Brzozowski, Ida Nowakowska and Małgorzata Tomaszewska.

The Polish national final will start at 21:00 CET and will last two and a half hours. You can watch it through TVP2’s frequency by clicking HERE.

Stay tuned to Eurovisionfun for all the news regarding Poland’s participation in Eurovision 2022!

Eurovision 2022 is entering the selection period. The competing countries choose their representative through either a national final or an internal selection. One of these countries is Poland, where the public broadcaster (TVP) will announce the representative for Eurovision 2022 this week. Who is more likely to represent Poland? Some of the most serious candidates are: Daria, Kuba Szmajkowski and Krystian Ochman.

TVP works on project “Eurovision 2022” for many months now. In mid-September, the public broadcaster published the rules of the internal selection and received several dozens of applications. Anyone interested had until November 2021 to submit their proposal. After this deadline, the competition committee decided upon the Polish representative for Turin. At first, TVP was going to publish the results in January 2, however the announcement got postponed until January 15.

Will Daria represent Poland in Eurovision 2022?

This information was publicly known from November through social media. Since then, Daria and her proposal Paranoia are, according to fans, the most likely to represent Poland. Daria herself keeps distance from speculations and admits in interviews that she is not sure about submitting to internal selections. However, from time to time Daria stokes rumors by publishing reports in her social media that may indicate that she is involved with the selection process for 2022

For now, it seems to me that I am the only one in the minds of Poles. It seems that I am the only one whose profile is appropriate to everyone and also because I have worked abroad as well as singing in English and having my songs on the radio. […] A lot of people think so but I have no idea yet. Of course I would be delighted to represent my country in Eurovision. I would give it my best.

Another artist interested in representing Poland at Eurovision 2022 is Kuba Szmajkowski . A former member of the 4Dreamers team in 2021, he focused on the development of his solo career. Kuba himself has confirmed that his proposal for Turin is his club hit single Lovesick. It is no secret that he loves Eurovision and some of his favorite contestants are Helena Paparizou and Eleni Foureira.

I am a big fan of Eurovision since 2015. My dream is to perform at the world’s biggest events. Every year I follow the contest and I support our representatives. I think my song is a very good choice and it will work really well in the contest, so I submitted for the Polish selection. The song talks about a difficult relationship that we are addicted to, but on the same time it hurts. The song was created in cooperation with well-known producers and my Swedish-Polish team

After several weeks of speculation and fan expectations, Krystian Ochman confirmed that he was not only interested in Eurovision 2022, but also that he submitted a song to TVP. One of his advantages is the experience that Krystian Ochman gained by winning The Voice of Poland. A lot of fans believe that thanks to his win he could be successful in the music industry and achieve a good result in Turin.

Recently, I did something with ATUT and BLACK HI-FI, maybe for Eurovision. […] Olek Kowalski, a great producer, and also in favor of making modern songs, with a beat, singing at a faster pace with a nice melody. We worked together in the studio to have a song suited for Eurovision, but one that I can carry on my own.

See his performance on the Grand Final of the Voice of Poland:

Not only Daria, Kuba Szmajkowski and Krystian Ochman sent their proposals to Polish Television. A number of participants have confirmed their participation in the internal selections through their social media. Among them: Karolina Stanisławczyk, Szczepański Siostry, Oscar Jensen, Michał Gabor, Anna Cyzon (National Qualifiers 2010), Łzy, Unmute, So So, Juliet Daisy & Duplox, Voytek Soko Sokolnicki and recently Mauer.