After the second rehearsal,  S10 spoke exclusively to EurovisionFun camera and Apostolis Matamis at Museum Reali in Turin!

The representative of The Netherlands in Eurovision 2022 stated that she is very happy from the very first rehearsal, which saw that the whole plan of her team for the competition is seen on stage.

She also said that the second rehearsal was more stressful because the journalists were watching, but nevertheless it went very well and that she does not intend to change her stage presence for the semifinal.

The message of her song is inspired by when she was younger and had some mental health problems. He stressed that while she has been writing songs since she was a teenager and has not mentioned these problems, while with “De Diepte” she finally did.

You can watch the full S10 rehearsal in the video below:

Follow us on all social media, so you won’t miss a moment of what will happen in Turin:

Stay tuned to EurovisionFun for all the latest news regarding Eurovision 2022!

The next country that takes the stage is The Netherlands with the amazing S10 and her song “De Diepte“.

S10 is the moniker of Stien den Hollander, a Dutch singer, rapper and songwriter.At just 21 years of age, the artist has made a name for herself as the darling of the Dutch alt-pop scene, winning over critics, amassing a loyal army of fans, and triumphing at prestigious awards ceremonies.
In 2016, S10 took it upon herself to write, record and self-release her first mini-album, Antipsychotica. Word of mouth led to the creative talent’s popularity to explode, resulting in a coveted record deal the following year, at the age of 17.With millions of streams to her name, collaborations with some of the Netherlands’ biggest artists and rave reviews from music critics, the headliner from Hoorn continues to forge her own path in the music industry.

This is the first of several female-led alt-pop/folk ballads this year, and it’s the first time Netherlands have sung in Dutch since 2010. They didn’t qualify on that occasion, but this song is something quite special.

S10 is Stien den Hollander, and her costume is a very stylish black dinner jacket that’s cropped at the front but has long tails at the back. Her staging is is a smoky plinth and some dramatic lighting, and it delivers real impact. The Dutch delegation seem very happy with that, and so they should.

Below you can watch a small clip from The Netherland’s first rehearsal from Tik Tok: 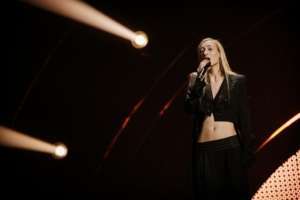 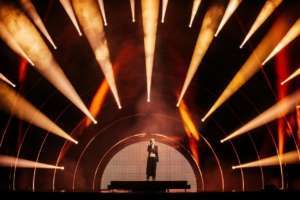 The second rehearsal of “De Diepte” will be at the 4th of May and Eurovisionfun will be here to give you a full description of that one!

S10 and the Dutch delegation, will travel to Turin with a different stage perspective for this year’s Eurovision Song Contest.

As the singer said in the Dutch talk show “Matthijs gaat door”, the laser effects that were used in the first live performance of her song “De Diepte“, will not accompany her performance in Turin.

Specifically, S10 said about her staging:

Yes, we could do it like that there as well… but that is not the plan. This (the lasers) was an idea of the talkshow.

The experienced team behind S10, for which you can learn more here, seems to want to surprise the fans of the contest and take the song to a different path from that of the first live performance.

You can remember the first live performance of “De Diepte” by S10 below:

The Netherlands will performe in number 8 of the running order in the first semi-final on May 10, and as of now the betting odds consider her qualification for the Final almost granted.

But what do you believe will be the final result for “De Diepte”? Write us in the comments below!

After the release of “De Diepte” on March 3rd, S10 performed her song for the first time in Dutch TV.

S10 has been a guest at “Matthijs Gaat Door” to promote her song in the Dutch audiance and sang her song “De Diepte” for the very first time.

Who is S10?
S10, 21 years old, is currently one of the leading alt-pop and rap artists in The Netherlands. She signed her first record deal with Noah’s Ark label at the age of 17. Subsequently, she released her debut album named “Snowsniper” in 2019, leading her to winning an “Edison Award”, the most prestigious Dutch award.

A second album release named “Vlinders” followed, the year after, in 2020 and also a sold-out tour and multiple chart-topping singles.

S10 shares with her fans her most personal stories by spoken word, rapping and singing. For her, it is important that personal feelings and stories are conveyed to the public in her mother tongue. That means that she will sing in Dutch, as also announced by the Dutch broadcaster.

She has collaborations with some of the biggest names in The Netherlands, reaching millions of streams on all major music streaming platforms and earning fabulous reviews, from music critics.

Watch the official video of “De Depte” below:

What do you think of S10’s perfomance? Write your opinion in the comments below!