Tag Archive for: The Rasmus

Finland is set to participate in the Eurovision Song Contest 2023.  Uuden Musiikin Kilpailu (UMK) continues as the national final for Finland.  In 2023 UMK will have its 12 edition as the national selection for the artist and song representing Finland at Eurovisin 2023.

Finnish Head of delegation and producer Anssi Autio has stated:

The reputation and popularity of Eurovision and UMK among audiences as well as artists have increased year by year, and our next season will be bigger than ever. If you are interested in submitting a new song, start writing it right now!

Yle has launched UMK as a national final for 12 years since 2012.  The Rasmus won the last edition of UMK and went to Turin.  They ended up in 21st place.

The artists participating in the Finnish national final can submit their songs for UMK starting in September 01 until September 05.  According to the EBU rules, songs released from September 2022 are eligible to participate in Eurovision 2023.

The Rasmus represented Finland in the Eurovision Song Contest held in Turin with the song Jezebel.  The Rasmus received 38 points.  They finished in 21st place.

Stay tuned to Eurovisionfun for more updates on Eurovision 2023!

After the conclusion of their second rehearsal, The Rasmus, who represent Finland in this year’s contest, gave an exclusive interview on EurovisionFun and Apostolis Matamis.

Overall, they pointed out that they are satisfied with the outcome of the rehearsal, but they asked for more than 15 changes, in order to optimize their staging.

Moreover they sent their message to the Greek fans of the band and announced that they are going to hold  a concert in Athens on 27th of June, as part of a big rock festival.

Below you can watch the Rasmus interview after their second rehearsal.

The fourth act to rehearse is the opener of the Second Semi-Final –  Finland – with their worldwide famous rock group – The Rasmus with their song ”Jezebel”. Finland’s set is covered with with huge, floating black balloons, and the band have brought bright yellow wet weather clothing to the Turin stage. Maybe they’re planning a dip in the waterfall? As you’d expect from The Rasmus, this is a really confident performance that packs a powerful visual punch with the yellow lighting. They’re like a swarm of rock bees, and we’re very much awake. Of COURSE Finland have fireworks and smoke jets in the final chorus – it’s pure rock ‘n’ roll. This is what we found out about the first rehearsal of theirs.

About The Second Rehearsal

What an opener! Fantastic camerawork, the props add more power to the song and it looks pretty much epic. It’s vocally bad and we hope the soloist improves until the Jury Show which will take place one day before the Second Semi-Final! Nothing else to add, the atmosphere they have created is fabulous, locals will enjoy it!

After Maro from Portugal, the legendary band The Rasmus also mentioned in the press conference followed their first rehearsal, that one of the songs that stands out from this year’s competition is Die Together!

The Greek and British participation was singled out by The Rasmus, as they revealed in the press conference shortly after the completion of their first rehearsal, which admittedly went very well.

They are the second artists after Maro from Portugal who give a vote of confidence in the Greek song and Amanda, who since yesterday continues the rally of rise in the betting companies, in the polls and in the fan predictions!

The second rehearsal of The Rasmus is on Thursday at 11:15 CET

Kicking off the first rehearsals of the 2nd Semi-Final of Eurovision 2022 are the Finnish rock superstars “The Rasmus” with their energetic song “Jezebel“.

Everything about The Rasmus :

The popular rock group “The Rasmus” was formed in 1994 in Helsinki and has had worldwide success with singles like “In The Shadows” and “Livin’ In A World Without You”. The current line up consists of Lauri Ylönen (vocals), Eero Heinonen, (bass), Aki Hakala (drums) and Emilia Suhonen (guitar). The band has sold 5 million albums worldwide and approximately 350,000 albums in Finland alone, and has won numerous awards, both domestic and international. They have released 9 studio albums and are currently working on their next one.

Finland’s set is covered with with huge, floating black balloons, and the band have brought bright yellow wet weather clothing to the Turin stage. Maybe they’re planning a dip in the waterfall?

As you’d expect from The Rasmus, this is a really confident performance that packs a powerful visual punch with the yellow lighting. They’re like a swarm of rock bees, and we’re very much awake. 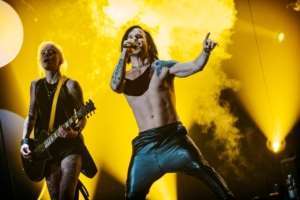 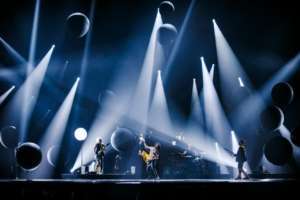 Below you can watch a small clip from Finland’s first rehearsal from Tik Tok:

The second rehearsal of Finland will take place on Thursday 5/5 so we will have a better picture of what we will see from The Rasmus on the stage of the competition.

Finnish public television has posted on social media a short excerpt from The Rasmus rehearsals, just weeks before the legendary band representing the country in this year’s music contest, leaves for Turin and Eurovision 2022.

In this video we see that the yellow and black color, which dominated the appearance of The Rasmus in the national final, will be here as well. We also see various large balloons, as promised, to be in place with some of them going up and down. The appearance remains dynamic, but without losing the special identity of the band.

The Rasmus is getting ready for Turin!! 🔥 Here’s a little sneak peek to the rehearsals… 👀💛 #ESC2022 #eurovision #therasmus pic.twitter.com/iybnd9mdUL

The Rasmus participate with the song Jezebel, in the second semifinal. In fact, it is an ear that will open at night, since they are the first to compete!

Stay tuned to Eurovisionfun for all the news regarding Finland’s participation in Eurovision 2022!

You can vote for the Grand Final of our poll here!

The second episode of the EBU’s podcast on the Eurovision Song Contest was released today.

Music presenter and reporter Steve Holden is the presenter of the show! The Eurovision Song Contest Podcast features news and interviews with this year’s artists, iconic Eurovision legends and the people responsible for making the contest happen, those behind the lights and on whom the whole institution relies. At the same time, it offers fans a behind-the-scenes look at Turin and features different voices from all over Europe and beyond.

Episode 2 of the #Eurovision podcast has dropped! 🥳

This week @SteveHReports hangs out with S10, Brooke, The Rasmus, Citi Zēni, Monika Liu, We Are Domi and Ochman in Amsterdam 🇳🇱🇮🇪🇫🇮🇱🇻🇱🇹🇨🇿🇵🇱

This week, Steve Holden met up with S10, Brooke, The Rasmus, Citi Zēni, Monika Liu, We Are Domi and Ochman in Amsterdam.

You can listen to and subscribe to the podcast HERE.

The official account of UMK, the finnish national final, controlled by the public broadcaster YLE, has just brought to light information about The Rasmus‘ performance and staging in Turin via a Twitter post.

The post emphasizes that the band’s appearance on the Eurovision stage will be very different from their appearance in the finnish national final, which took place in February. In addition, many props in the air will be used, as they also seem to be referring to balloons.

The Rasmus's Eurovision show will be VERY different compared to UMK. There's gonna be a lot of props….in the air!! Get ready 🎈🎈🎈#ESC2022 #eurovision pic.twitter.com/731OBvF8MN

Below you can watch the band’s performance in the finnish national final UMK:

We remind you that Finland will be opening the second semi-final on May 12th.

Stay tuned to Eurovisionfun for all news regarding the Finnish entry in Eurovision 2022!

A total of seven finalists, that were picked among 312 submitted songs from more than 1000 songwriters, competed in the national final, claiming the ticket to Turin.

The seven candidates of the night were:

The results was decided by 25% international jury vote and 75% televote.

After the public and the international juries voted were combined, the results of the national final are:

The big winner of Uuden Musiikin Kilpailu 2022 were The Rasmus with the song “Jezebel“.

You can watch The Rasmus’ performance in the national final here:

The winners of Uuden Musiikin Kilpailu 2022, The Rasmus, were taken to a press conference after their victory. They were asked about their plans for Eurovision and their participation in UMK 2022.
What they said was that they look forward to performing together with last year’s winners, Måneskin. They added that it’s great that rock music is getting better and better and it’s getting bigger in the contest each year. Lastly, the lead singer, Lauri Ylönen, revealed that it is long time dream for their fans to see them performing in UMK.

Do you agree with Finland’s choice of representative for Turin? Tell us in the comments!

The running order is as follows:

The big favorite for the win according to the odds, The Rasmus, are the ones opening the show, while the one to close it is Tommi Läntinen.

Stay tuned to Eurovisionfun for all news regarding Finland’s participation in Eurovision 2022.