Tag Archive for: What Love Is

The former chief producer of Eesti Laul, Estonia’s competition to find its Eurovision entry, Mart Normet, thinks that Uku Suviste would have succeeded at Eurovision and perhaps even won the contest, with the song “What Love is”, which was composed by Dimitris Kontopoulos and Sharon Vaughn and Uku Suviste himself.

Normet is going against the general opinion in his views. Estonia didn´t make it top three in the predictions charts. The favorites were Lithuania, Bulgaria, and Switzerland.

“In that sense, it´s even sadder that the contest was canceled because this year, the top three were predicted to be countries that haven´t won in a long time,” Normet said.

From these three, Normet liked the song “Tears Getting Sober” the most. “It has some Billie Eilish moments, but it´s not so dark. And when I heard these songs, this really made me listen,” Normet said.

On the other hand, he did not like the Swiss entry so much. However, Normet acknowledged that a lot of good singers have come from the birthplace of singer Gjon Muharremaj.

“She has Albanian-Kosovar roots. If you think about how many successful singers there are from the region – Dua Lipa, Rita Ora, Bebe Rexha, maybe some of the biggest female stars in the world today have come from Albania or Kosovo,” Normet said.

Normet also listened to the Russian story “Uno”, for example. “They have one decent Kreisraadio number,” Normet said. “‘You’re joking’, and making it an international joke.”

In addition, he remembered the Icelandic entry “Think About Things”, which according to Normet sounds very nice and doesn´t lack irony.

Today, Wednesday 11/11 and tomorrow Thursday 12/11, the 24 artists who will compete in Eesti Laul 2021 for the representation of Estonia in the next Eurovision song contest will be announced.

Estonia will normally host Eesti Laul next year and will not send Uku Suviste to the ESC, as other countries have already announced.

Croatia, Spain, Latvia, the Netherlands, Ukraine and Greece have already announced that they will be represented by the artists themselves next year. Estonia is following in Sweden’s footsteps and will host Eesti Laul next year as well. Indeed, public television in the country invites Uku Suviste to take part in the year.

Uku next year as well

As it finally happened, in the Ringvaade live show, the 37-year-old artist responded positively to the Eesti Laul 2021. He will thus claim his scripts and presence at the next Eurovision through the Baltic participation selection format. The remaining participants are due to be announced in due time, as we are still in March.

It seems that public television stations do not follow a single line on the artist who will represent them at Eurovision 2021, as some countries wish and have already announced that they will be represented by the same artist, while others, mainly those organizing national finals, will perform normally their festival and simply this year’s representatives will lose their right to compete in Eurovision.

Uku Suviste would represent Estonia at Eurovision 2020 with Dimitris Kontopoulos’ song “What Love Is”.

The official results of televoting in the Eesti Laul 2020 final have been officially announced shortly through the Estonian public television website. Uku Suviste didn’t just win, but he did triumph, gaining about 70% of Estonia’s preference in the super final!

A horse race finally proved to be Esti Laul this year, as Uku Suviste was never threatened by his rivals.

In the semifinals he had more than double the votes of the favorite and finally finished second in the final standings, Jaagup Tuisk and the song of Beautiful Lies.

He had 16,880 votes in the final round of voting, with Jaagup Tuisk receiving just 5,259. In the super final between the three candidates, the difference was struck, as within just 15 minutes of the telecast of Uku and “What Love Is” by Dimitris Kontopoulos and Sharon Vaughn received 33,582 votes, with “Beautiful Lies” marginally finishing second, receiving just 7,944 votes. Uku Suviste’s song was voted with 68% to be Estonia’s entry in Eurovision 2020. 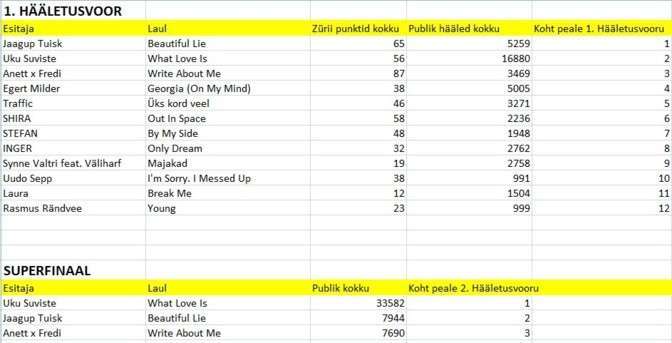 Dimitris Kontopoulos wrote his own story yesterday, after equaling Borislav Milanov’s record of 2017 with his three entries in the same contest last night.

Dimitris Kontopoulos has three songs in this year’s competition. Greece’s SUPERG! RL, ​​Moldova’s Prison and Estonia’s What Love Is. This is something that happened once again during the contest.

In 2017, Borislav Milanov was the composer, among other co-creators of course, of the holdings of Serbia, FYROM and Bulgaria. Of course, only one of his three songs made it to the finals. Particularly the Bulgarian one, “Beautiful Mess”, which finally won the second place.

In order to prevent the malevolent ones that are abundant this year, Dimitris Kontopoulos typically (although he has rights reserved normally), does not sign the Estonian song as a composer, but as a producer. This was done so that there would be no problem with the rules of Eesti Laul, since the candidate songs should have at least 50% Estonian creators. So, Sharon Vaughn, who is an American citizen and composer Uku Suviste himself, seems a regular lyricist.

The record holder is lyricist Sharon Vaughn, as no lyricist in the history of the competition has ever signed three entries in the same competition!

However, Dimitris Kontopoulos is also expected to write history, but to be sure, he will write a new story, since if all three of his entries go to the final, he will be the only composer in the history of the competition with three songs in the final!

In stubbornness, the Dream Team and Dimitris Kontopoulos, in particular, remain dynamic and successful in Eurovision, continuing to enjoy the recognition and recognition of many countries!