For another year, Denmark has chosen to participate in the Eurovision contest through the Dansk Melodi Grand Prix (DMGP).

Compared to the previous year, this year radio semifinals were held, which also defined half of the finalists. Another difference is that in the super final the public exclusively decided the big winner of the institution and the representative of the country in the ESC. But the most significant change over the years was that the music at the DMGP 2020 final was accompanied by a live orchestra, namely Antonelli Orchestra, Denmark’s most famous live orchestra! It also needs to be mentioned the fact that spectators were not arriving at the Royal Arena where the night of the coronation was held.

The big winners of the DMGP 2020 were Ben & Tan with the song “Yes”. In fact, in the second round of voting, in the super final, the duo garnered more than 60%! Surprisingly, the other big favorite of the night is Jasmin Rose ft. Roxorloops limited to 8th place!

Analytically:
In the first phase of the vote the result was judged by 50% by a committee and by 50% by the television audience.

All three super finalists had been added to this year’s DMGP line-up through the radio semifinals, which makes us believe that these semifinals will be almost certain over time.

In the second round of voting only the public could vote.

For the first time without the audience due to crowning, the DMGP 2020  was completed shortly. The big winners are Ben & Tan with the song “Yes”, and will therefore represent Denmark at Eurovision 2020 in May in Rotterdam.

Hella Joof and Rasmus Bjerg were the presenters at the DMGP 2020, which was being held at the Royal Arena in Copenhagen.

The most significant change, however, compared to previous years is that the music for the songs at the DMGP 2020 final was accompanied by a live orchestra, namely Antonelli Orchestra, perhaps the most famous live orchestra in Denmark! The last time a live band was used in a Danish national final was in the distant 1999.

The DMGP 2020 winner emerged after two rounds of duels. In the first round out of 10 candidates only 3 won the ticket to the Super Final. The vote was conducted via sms and application. In the application, each song can be voted on only once in both rounds of voting.

The three qualifiers in the Super Final were:

Tonight the big final of the DMGP 2020, Denmark’s national final for Eurovision 2020, will take place.

Of the 10 participants this year, five emerged through the DMGP 2020 radio semifinals (three through a television audience vote and two after a special panel was selected), with the other five selected by DR to compete directly in the Final.

The 10 contestants competing for the Rotterdam ticket will appear in the following order:

Hella Joof and Rasmus Bjerg will be presenters at the DMGP 2020, which will be held at the Royal Arena in Copenhagen.

The most important change, however, compared to previous years is that the music of the songs at the DMGP 2020 final will be accompanied by a live orchestra, namely Antonelli Orchestra, Denmark’s most famous live orchestra! The last time a live band was used in the Danish national final was in the distant 1999.

The winner of the DMGP 2020 will emerge after two rounds of duels. In the first round, only 3 of the 10 candidates will win the ticket to the Super Final, with one of them being the winner and representative of the country in the Netherlands. The vote will take place via sms and application. In the application, each song can be voted on only once in both rounds of voting.

Yesterday it was decided to stage a spectator-free show at the Royal Arena, as a preventive measure for the coronavirus. Read more HERE.

Bets just before the final of the DMGP 2020

The winner’s betting situation is not clear, as we have two entries that stand out from the rest and are very close to each other.

At the top of the short-head betting table is Ben & Tan’s Yes, with Jasmin Rose ft. Second at the bottom. RoxorLoops and their song, “Human”. The rest of the contestants are much lower and hardly anyone will be surprised. 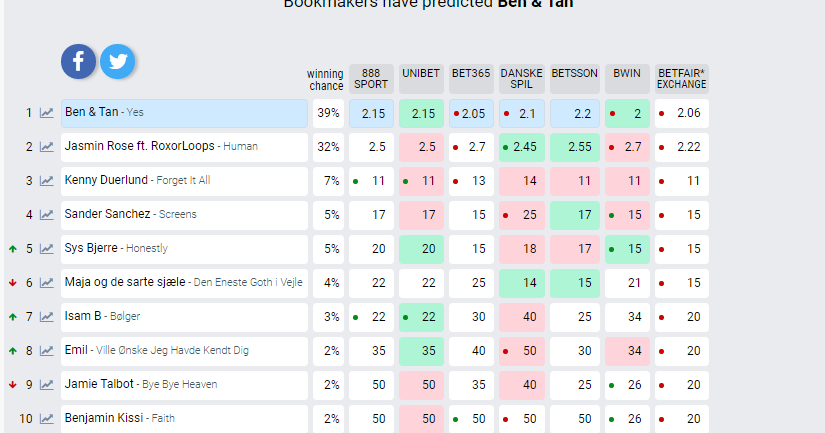 Danish Prime Minister Mette Frederiksen‘s decision to ban all concentrations of more than 1,000 people in the country by the end of March also affected the DMGP 2020, which will take place tomorrow (7/3) at the Royal Arena in Copenhagen.

For the first time in its history, the DMGP 2020 will be held without an audience. Most of the 10,000 spectators who bought a ticket to the Danish National Finals will now have to watch it from their home.

Members of the local Eurovision Fan Club feel the same frustration that they will not be able to live up to their country’s choice to participate in Eurovision 2020.