In a press release sent a few minutes ago by the San Marino Public Television (SMRTV), the channel  expresses opposition to the EBU’s decision to cancel the 65th Eurovision Song Contest.

“Quite rightly – obviously – the EBU’s decision to cancel Eurovision 2020 in mid-May, but as a broadcaster, and I’m sure we are not alone, it would be more logical not to cancel the event altogether, but as it did for the European Games , a postponement for autumn 2020 or directly for 2021 … would allow all public broadcasters to open the 2020-2021 season with Eurovision 2020, giving an important and strong message about the international language of music”.

After the internet voting that San Marino put on the two candidate songs for Eurovision 2020, the result came out at midnight on Sunday, March 8th! The song that will represent the country at the 65th European Song Contest in Rotterdam is “Freaky”!

San Marino has kept the tradition of selecting a former representative for the Eurovision song contest this year, after officially announcing – along with the song now – that Senhit, who represented the state in 2011, will find itself representing oldest active republic again in May in Rotterdam.

The 40-year-old singer, who lives in Bologna and comes from Italy and Eritrea, represented San Marino at Eurovision 2011 with the song “Stand By”, but then failed to qualify for the final, despite her beautiful appearance.

Senit is the third artist to be selected for at least the second time as the country’s representative in the competition. Valentina Monetta has participated four times and Serhat two!

The candidate for the German national final in 2019, Aly Ryan, after announcing that she had sent a bid to represent Switzerland at Eurovision 2020, also expressed her interest in another country.

Yesterday through her Twitter account, she revealed that she had sent 7 songs to San Marino public television, SMRTV. However, SMRTV has not yet responded to her emails. 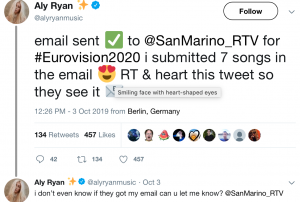 The 23-year-old singer, who is ready to compete at Eurovision, has already submitted 5 songs to claim the Swiss representation in Rotterdam, while she, along with two others, has filed them on San Marino television.

Aly Ryan was a contender in the 2019 German national final Unser Lied für Israel, which, though one of the big favorites to represent the country, was limited to 4th place and missed the opportunity to represent her country in Israel.