The results for the OGAE Poll 2022 continue today,with OGAE Turkey being the tenth club to reveal the results of their members.

The results are as follows: 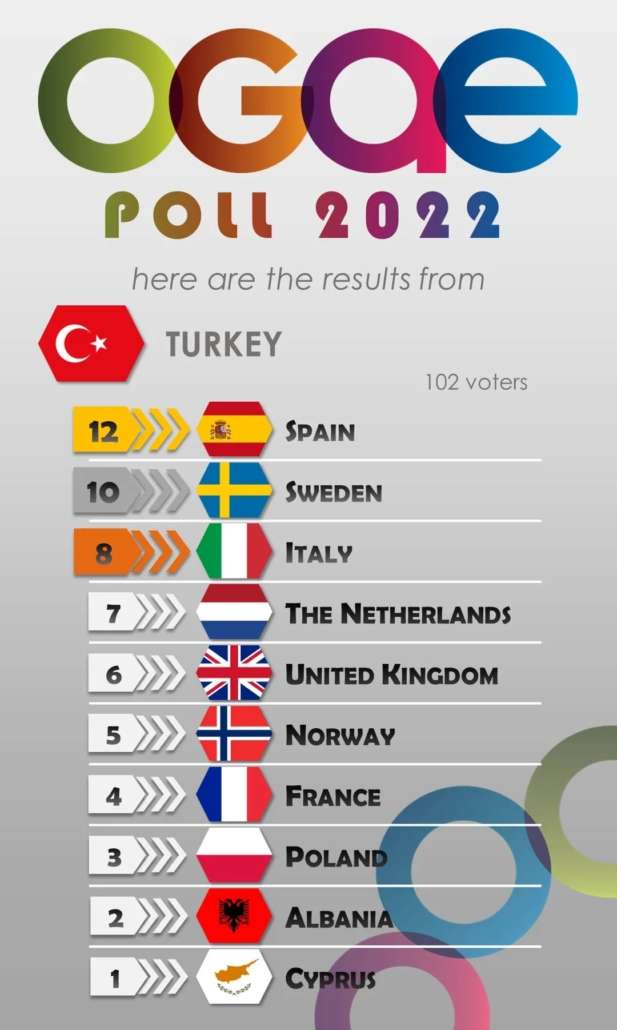 Another 12 points from OGAE Turkey to Spain and Slo Mo.

The total scoreboard after the results of ten fan clubs is as follows: 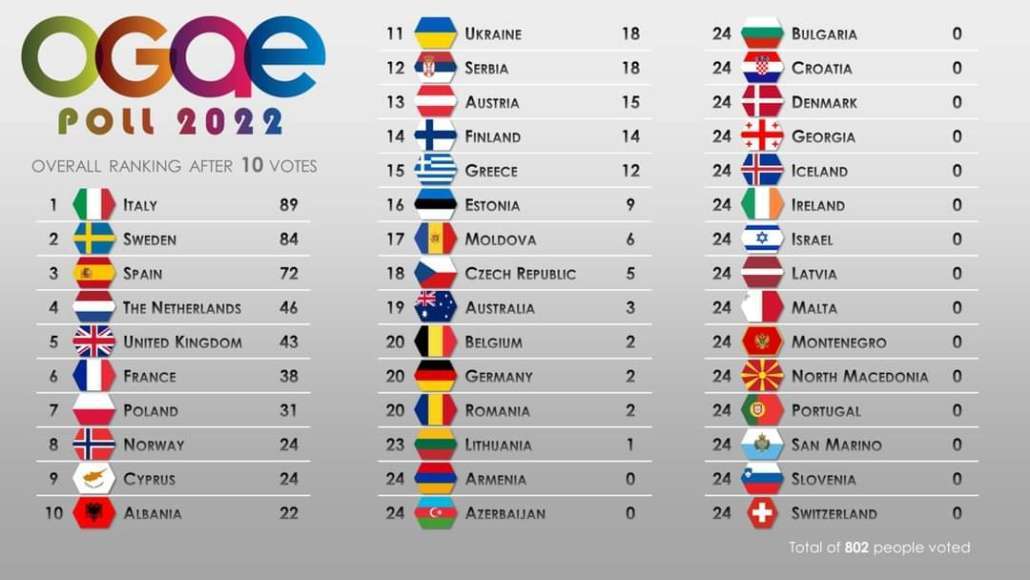 Remember to vote in our poll for the Grand Final!

Stay tuned to Eurovisionfun for all the results of OGAE Poll 2022!

For the sixth consecutive year the second Network of Eurovision Song Contest fans ,the INFE Network, in cooperation with ESCToday, carries out the INFE Poll.

The members of the Network in the 22 local fan clubs, have already voted their favorite songs of Eurovision 2022 and with the help of ESCToday, announce their results.

Today, we have the results from INFE Turkey:

The overall results are as follows:

Stay tuned to Eurovisionfun for all the results of the INFE Poll 2022!

On the last episode of Euro Trip, Jon Ola Sand, the ex-Executive Supervisor of Eurovision, talked about the possibility to see a debut of Kossovo or Kazakhstan but also for a returning country to come back any time soon.

At first, in his interview with the host of the show, he mentioned Kazakhstan and if the have chances to debut in Eurovision:

After that he talked about Kossovo and their chances of a debut, when he mentioned:

“There has been no attempt from the EBU to bring Kosovo into the Eurovision Song Contest. There have been discussions as a broadcaster, but they  lack the status to allow them to compete.“

Australia have been an exception because the country’s public broadcaster SBS has competed in every edition of the competition since owing to its associate EBU membership.

Last but not least, he talked about the possibility to see Luxembourg, Andorra, Slovakia, Monaco or Turkey returning in Eurovision Song Contest:

“We had talks with all the broadcasters you mentioned . It hasn’t been a priority for us to bring them in. There isn’t a need to grow the number of participants. But Turkey would have a higher priority than say, Monaco for instance”

Jon Ola Sand served as Executive Supervisor between 2011 and 2020. Prior to this role he was Executive Producer for Eurovision when the contest was held in Oslo, Norway in 2010.

Stay tuned in Eurovisionfun for all the latest news of Eurovision!

Through the official account of the Eurovision Contest on Twitter, a few minutes ago we had an important piece of information. The countries that will take part in Eurovision 2022, will be more than 40!

A few days ago again through Twitter, the Eurovision account asked fans how many countries they think will take part in Turin.

Soooo how many countries do you think will join the party in Turin 2022? 🎶🥳🇮🇹

About 62% answered more than 40 countries and today we learned that this answer was the right one!

The above practically means that apart from Montenegro, which has already announced its return to Eurovision 2022, but also Armenia, which, although it has not yet opened its papers, its participation in Junior Eurovision in December makes us almost sure that the Caucasian country will return. We may have other countries that will either return or make their debut in the contest that will take place next May in Turin.

Andorra, Monaco, Bosnia and Herzegovina, Slovakia and Hungary do not seem willing to return. On the other hand, Turkey has so far kept a low profile. However, the EBU’s announcement this summer, for discussions with the country’s public broadcaster regarding the possibility of its return, leaves some hope.

Soon, however, we will find out the full list of countries that will compete in the 66th Eurovision Song Contest and all our questions will be answered!

Hopes to see Turkey  returning to Eurovision seem to have reduced as Ibrahim Eren, the former chairman and general manager of Turkish public broadcaster stepped down as director.  Eren recently made public that TRT was in contact with the EBU to discuss the potential return of the country to the pan-European competition.  However, president Erdogan decided to replace him.

A few weeks ago Erenrevealed that the public broadcaster was seriously discussing a potential comeback.

Our Board of Directors still continues with the same decision, but meanwhile, we are also in talks with ‘Eurovision’. A very good person came to ‘Eurovision’ from Northern Europe. I think this year was very successful. After a long time, they had a nice competition. Our friends started meeting with the newcomer. I don’t know what will happen?

Furthermore, the EBU itself  confirmed that they were in direct with TRT, in order for Turkey to return to the Eurovision Song Contest.  The EBU made the following statement on eurovision.tv:

Turkey hasn’t participated in the Eurovision Song Contest since 2012, pressing pause on a rich history within the competition that includes 34 entries and a 2003 victory thanks to Sertab Erener’s Every Way That I Can.

Despite the break in participation, the Contest remains popular in the ‘land of four seasons’ and speculation about a potential return has been fueled by İbrahim Eren, Chairman and Director General at national broadcaster TRT, after commenting on the prospect of Turkey returning to the Eurovision Song Contest.

However, Ibrahim Eren’s departure from his position, reduces the possibilities of seeing Turkey in Eurovision for 2022.  Ibrahim Erem publicly thanked Erdogan via Twitter for the opportunity he gave him in his previous role.

Ahmet Albayrak will take office as the  new President of TRT .  At the same time, Mehmet Zahid Sobacı will take the role of new General Manager . Both Albayrak and Sobacı are political allies of Erdogan and members of the Islamist AKP party.  Therefore, their profiles do not seem to reconcile with the spirit of the Eurovision Song Contest.’

Nevertheless, fans can keep their hope of a future Turkish return to the competition.  This however, will depend of a political decision by Erdogan who may be interested to demonstrate that Turkey remains a European country and to improve his international reputation.

Do you think that Turkey will finally return to the Eurovision Song Contest?