Mikolas Josef, who holds the record for the best place of the Czech Republic in the competition, is claiming another participation in Eurovision, since according to our exclusive information, the 26-year-old singer submitted a participation in the national final of the country ESCZ 2022!

In 2018 Mikolas Josef took sixth place in the final of the competition with the song Lie To Me. Since then, his career has been on the rise, achieving even No. 1 in the domestic charts with the song Acapella.

After four years, Mikolas Josef is preparing to return to the competition, having already submitted a song for ESCZ 2022, the online national final of the Czech Republic for the selection of its representative in the next contest.

About 150 entries were sent to ESCZ 2022, six to eight of which will take part in the show, which will take place in December. Each candidate must submit a recorded live version of the song, which will be used as a basis for voting on the show. The finalists of the national final, are going to be presented at the beginning of December! ESCZ 2022 will be the first national final of the season, since according to what was announced on Czech public television, it will take place in December.

What remains to be seen is whether Mikolas Josef’s song is selected among the finalists of ESCZ 2022 and whether, of course, he manages to win the Czech ticket again for the Eurovision Song Contest!

Until then, however, let us enjoy once again his previous entry: 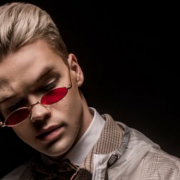 Spain: Jorge Gonzalez in the studio of Dimitris Kontopoulos to record his song...

Cyprus: The scenario “Kalomira” seems to fade out!
Scroll to top