News
You are here: Home1 / News2 / Eurovision3 / Eurostars4 / Georgia: The judges for The Voice Georgia revealed!

The jurors to join the judging panel for The Voice Georgia have been announced, in order to find the next act that will represent Georgia at Liverpool in Eurovision Song Contest 2023!

The judging panel is  formed of:

Stephane Mgebrishvili  has been involved in the music industry since the late 1990s and is best known as a member of Stephane and 3G, the group which won the Georgian selection for Eurovision 2009 but was disqualified from competing in Moscow for its politically influenced song “We Don’t Wanna Put In”.

Dato Evgenidze is a composer who writes music for film, TV and theatre, he has previously been a judge in the Georgian selection for Junior Eurovision Ranina.

The singer and composer Dato Porchkhidze was already a judge of The Voice in the first two editions. He is one of the most famous songwriters, he has created around 600 songs and soundtracks for movies and TV series and also he was a member of the “X-factor” jury in 2016.

For the  first time since 2020, Georgia decides to once again pick their representative through a TV show. The last Georgian representative to be chosen with this method was Tornike Kipiani from the Georgian Idol 2019, who represented the country in 2021, after the cancellation of the 2020 contest. This time, the selection will be held through The Voice of Georgia, which will return to the first channel of the Georgian television.

Circus Mircus represented Georgia this year with the song “Lock Me In” and ended up last (18th) in the second semi-final with 22 points.

Stay tuned on Eurovisionfun for all the news regarding the Georgian participation at the Eurovision Song Contest 2023, in the United Kingdom! 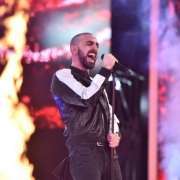 Georgia: Listen to Tornike Kipiani’s “Take me as I am” for Eurovision 2020
0 replies