The truth is that we waited a few hours to see if the first place of France and “Voila” in betting, was not something temporary and opportune because of the really beautiful stage appearance of Barbara Pravi in ​​yesterday’s national final for Eurovision, which conducted by TV France. Finally, it seems that Voila has come to stay and will keep us busy on the way to the 65th Eurovision Song Contest!

France was launched after the appearance of Barbara

Despite the fact that all the songs of the national final were known as early as mid-December, France remained in tenth place in the bets. Immediately after the live appearance of Barbara Pravi, the odds started to fall rapidly. A few minutes after the announcement of the final results and the great victory of Voila, France dropped Lithuania to the second place and moved to the first place of the bets. 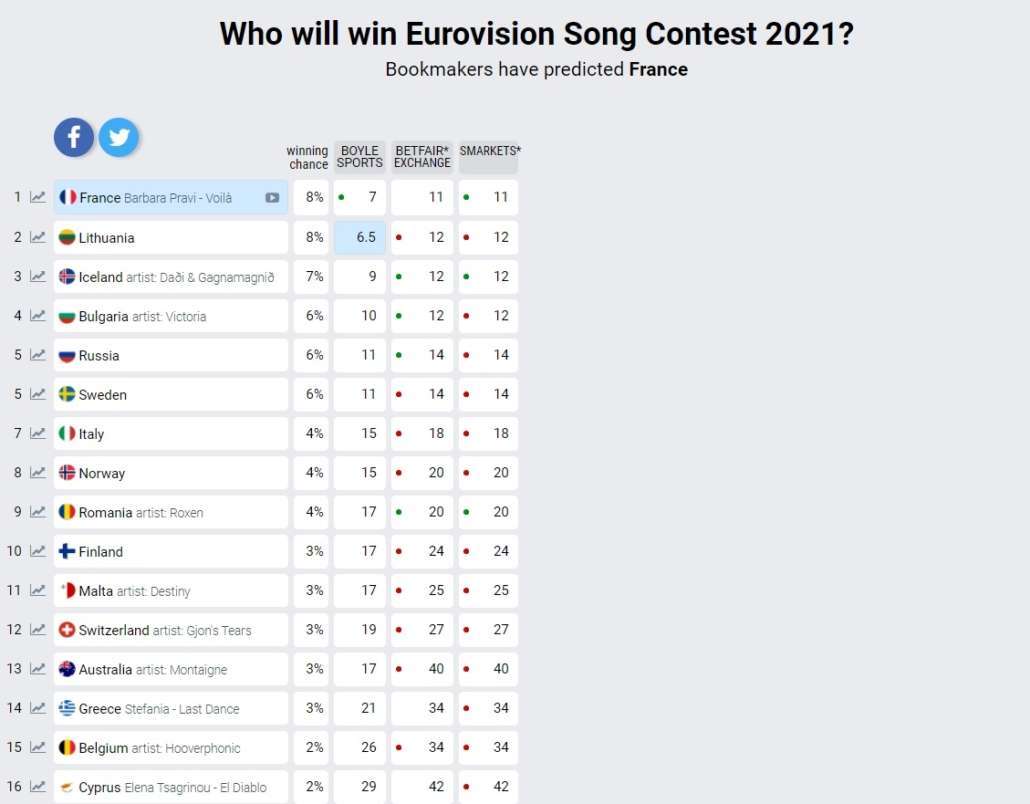 The above has its significance. It proves how important the live show is and how the stage presentation can turn the data upside down. We have seen it happen many times in the past in the contest. That is, songs that we did not consider a favorite, to reverse the situation and raise their shares on stage and vice versa of course.

This is the significance and perhaps the only safe conclusion we can draw from the first place of France in betting. Yes, it is still too early to talk about victory, but that does not overlook the fact that there is a dynamic. A dynamic that we did not see in Israel and Albania, who have also announced their songs.

TV France is also completely satisfied, since the comments of the users yesterday on the internet about the new format of the national final were more than positive. #EurovisionFrance was throughout the live broadcast of the trends in France, but also in Germany and Switzerland!

Viewership ranged at 12.3% or 2.37 million French on average. attended Eurovision France: c’est vous qui decidez. Higher numbers than the last national final held by France in 2019, when 2.14 million were tuned to their receivers to watch Bilal win with Roi.

We would say that both presenters received rave reviews, with Laurence Boccolini stealing the show, especially with her dancing figures. There are many who claim that it would be a perfect and at the same time different choice of presenter, if France wins and hosts the contest!

However, the video of Barbara Pravi’s live appearance has already exceeded 350,000 views in a few hours!

Will Barbara Pravi manage to bring victory to France, 44 years after country’s last victory in the contest?