Armenian head of delegation, David Tserunyan, noted a possible return of the country to the next Eurovision Song Contest and most probably Junior Eurovision too, in 2022, after their withdrawal this year.

David Tserunyan, who is also an elected member of the Reference Group, took part in the group’s first meeting with RAI lately. The Italian broadcaster, has already started setting up the forecoming contest of 2022.

Publishing the photo from the conference of the Reference Group, Tserunyan expressed his gratitude for his reelection and concluded that soon we will have some wonderful news, sparking hopes for the return of Armenia to the contest. 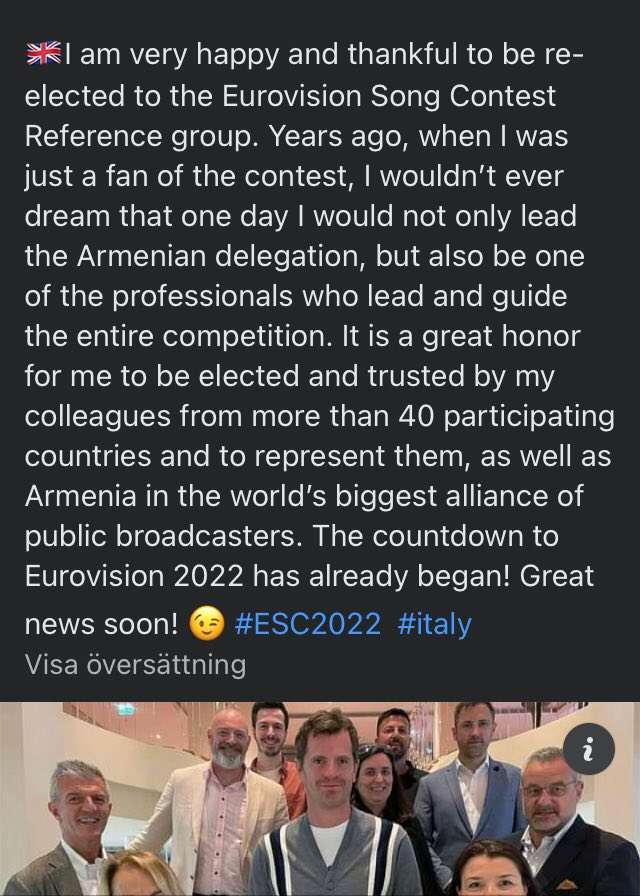 Armenian prime minister got a vote of confidence, not more than two days ago, which is a first step towards the recovery of the country, after their conflicts with Azerbaijan with regards to Artsakh.

We really hope that Armenia makes a return in 2022, along with other numerous withdrawn countries!

The winner of Junior Eurovision 2020 Valentina was invited to a show on French public broadcaster, on the night of Saturday 5/12, where she performed live J’Imagine.

As you will see in the video that follows, unfortunately Valentina’s live performance has nothing to do with her corresponding interpretation in the live on tape video, where she competed in Junior Eurovision 2020 a few days ago.

The EBU, answering an official question on Spanish delegation, said that all participants performed their entries live in the contest. However, yesterday’s live appearance of Valentina reinforces the accusations that some countries did not sing live, as as you will see and mainly hear, there is a big difference between the two interpretations.

Watch the video below and leave your own comments:

Was it a bad day for Valentina or did she really sing playback at Junior Eurovision 2020?

In fact, on the occasion of the accusations that literally closed the internet after the end of the contest, the head of the entertainment program of the Spanish public television (TVE), Toñi Prieto, formally asked the EBU, if indeed all the contestants in the live on tape videos, they performed their songs live.

EBU responded immediately to TVE, saying that as it was in the rules of this year’s contest, all participants in the live on tape videos, sang live, with the backing vocals playback. EBU emphasizes that there were also the necessary control and safety valves, to confirm the above.

The winner Valentina also referred to the issue, rejecting all the accusations:

Well I must say I’m glad some of you think this was playback, it means you can’t hear stress in my voice 😂💜 #JESC20

We remind you that in Junior Eurovision 2020 the contestants had to videotape a live interpretation of their song, at an earlier time than the contest. These 12 live on tape videos competed on Sunday, as due to the pandemic, the live presence of the artists in Warsaw was impossible.

Rutger Garecht who is 14 years old, won the online voting with his song Doroga Moya Soba. Tomorrow the national final will take place in Moscow and the jury will vote too, in order to decide the winner.

END_OF_DOCUMENT_TOKEN_TO_BE_REPLACED

EBU has announced the countries that will participate in Junior Eurovision 2020. While the list includes only 13 countries, according to esc-plus, the EBU is open to the participation of more countries, although the date for confirmation of participation has expired.

In the comment given by the EBU to esc-plus, they state that this is not the final list of countries that will participate in this year’s contest, since it is possible to confirm the participation even now.

The list of participating broadcasters we released today is not necessarily the final one – indeed, we would welcome other countries for JESC 2020, up to 20 broadcasters.

EBU for the number of Junior Eurovision 2020 countries

Given the current reality due to the pandemic of Covid-19, the Polish organizers decided to hold the show in a different way this year.

Its presentation and Interval Acts will take place in a studio in the Polish capital, while all participants will present their song in a studio located in each country.

In order to ensure the meritocracy of the institution, the members of the EBU and the 13 broadcasters agreed to use a similar stage layout to present all the entries.

The 13 countries that confirmed their presence in Poland at the end of November are:

This will not be the first time a country has been added to the participating countries. Perhaps the fact that participants will not have to travel to Poland will give new impetus to some broadcasters that had declined due to the pandemic and travel restrictions.

Junior Eurovision 2020 is scheduled to take place in less than two months. This year’s event will take place in Warsaw and so far 13 countries have confirmed their participation. However, it seems that nothing is certain yet, since even Poland does not take the realization of Junior Eurovision 2020 for granted! END_OF_DOCUMENT_TOKEN_TO_BE_REPLACED

The scene of the conflict between Ukraine and Russia, which began with the occupation of Crimea and its de facto integration into Russia in 2014, but also with the separatist uprisings in eastern Ukraine with the support of the Kremlin, has now reached Junior Eurovision.

Although a favorite, was ruled out

But let’s look at everything that happened from the beginning. Maksym Tkachuk was among the candidates to represent Ukraine in Junior Eurovision 2020. He applied with a performance of a Ukrainian rendition of the 1960s Giamaica song that was recorded. by a number of Italian artists.

Maksym previously participated in a festival called “Stars of the Albion”. His participation in this festival was the one that caused his exclusion from the national final for Junior Eurovision 2020. The reason for his exclusion was that he violated the rules of participation, and while the video with which he declared his participation had the most likes from their co-candidates, 12,000 before being removed from the official national default YouTube account.

The reasons for Maksym’s exclusion

The application form states that: the participant guarantees that he has not performed concert activities, performances, participation in public and / or private events organized by government agencies, institutions, economic entities, etc. of the country of the attacker or in the territory of the attacking country, in the Autonomous Republic of Crimea and / or in the occupied territory of Ukraine after 15.03.2014 and does not plan, will not announce the relevant appearances both during the period before and during national selection, and in the period after the Selection until the last date of the International Competition.

As the “Stars of the Albion” competition held from 28.02.2020 to 01.03.2020 was co-organized by the office of the “Russian Parliament / Russian Delegation in London” shows that this competition is subject to the executive power of the Russian Federation.

Zurab Alasania, a former managing director of Ukraine’s national broadcaster, also wrote about the case on Facebook, saying that Maksym’s legal guardian, his grandmother, had withheld the young artist’s involvement in the application forms. , at the “Stars of the Albion” festival. In addition, he states that the Russian Foreign Ministry is participating in the organization of the festival in question and therefore Maksym’s participation in the Ukrainian national final was no longer possible, after the announcement of the above. Mr Alasania also denounced the Russian media ‘s criticism of the decision, saying the rules were known and applied to all, and that he would not allow Ukrainian public television to launch a new case similar to the one. of Maruv in 2019, ending the non-participation of the country in the competition.

Maksym’s grandmother, who is also his legal guardian as he is an orphan, appeared disappointed saying that the Ukrainian television did not even bother to inform her by phone and everything was informed by the media. She believes that the reason for her grandson’s exclusion was that in “Stars of the Albion”, she sang “Smuglyanka”, a patriotic song of the Soviet era, the time when Russia and Ukraine were in the same state.

Opposition party Svoboda, meanwhile, has blamed Moscow for trying to use a 12-year-old orphan boy to propagandize pro-Russian positions in Ukraine as Russia seeks to oust Maksym. occupies Crimea and the eastern part of the country. Moreover, they do not consider that the choice of Maksym’s song in “Stars of the Albion” was accidental…

Is the reaction of the Ukrainians fair?

Here we will briefly state our point of view, because unfortunately the issue is very delicate and any attitude in favor of either side must be done very carefully, always respecting international law.

On the one hand, the cancellation of Maksym is completely legal and is based on the rules of the competition that were published from the beginning and were known to all participants. The fact that his legal guardian concealed Maksym’s participation in the festival shows that she knew it was a Russian-sponsored music competition, as she knew there would be reactions if her grandson’s participation was learned at this festival. The choice of the song, which also provoked reactions, was obviously not accidental, but it is something we will not comment on, as we do not know exactly what this song means for Ukraine.

The representative of Ukraine in the Junior Eurovision 2020 will be announced on September 12th.