Since May 15, after the victory of Kalush Orchestra, the question on everyone’s mind is: “Where will Eurovision 2023 be held?”.

Although the Ukrainian authorities, as well as the national broadcaster Suspilne, have made it clear that the winning country will host the contest, several countries have expressed their interest to be considered as back-ups. Among others, the UK, Italy and Sweden have expressed their willingness to host the contest. It seems, however, that one of the strongest candidates has stepped back off the scene.

On 13 June, the newspaper ‘Faro De Vigo’ published a wide-ranging interview with the president of RTVE, José Manuel Pérez Tornero. Among other statements (happiness about Spain’s result in Turin, plans for a Latin American song contest), President Pérez Tornero made it clear that Spain would not host Eurovision 2023.

“We don’t want to stay under the illusion of a good result, we will aim to win next time. We would host the contest ourselves, but in the end, if Ukraine withdraws, the BBC will organise it.”

It is, therefore, obvious that Spain is out of contention.

But has the EBU come to a conclusion? Perhaps, as the RTVE chairman seems pretty sure that all options have been left aside except Ukraine (which seems to be the EBU’s main choice) and the UK as the only remaining fallback option.

Whatever the case, however, it is certain that the name of the host country and city will not be revealed any time soon.

Stay tuned at EurovisionFun for all the latest news regarding Eurovision 2023!

Our friends from the always valid Eurofestivalnews in their exclusive article, state that the decision for the city that will host the 66th Eurovision Song Contest has not yet been made by RAI and the EBU.

The five cities vying for Eurovision 2022 will have to worry for an unknown period of time, as Italian public television has not yet reached its final selection. Milan, Turin, Bologna, Pesaro and Rimini each hope for their own reasons that she has submitted the most complete proposal to host this important event next May. The truth is, however, that despite the announcement from the official Eurovision account that we will soon have the announcement (posting a pizza that was baked), it seems that we will wait a few more days.

Eurofestivalnews reveals that the reason for this delay is the fact that RAI started the procedures for the selection of the city, publishing the relevant announcement for the submission of candidacies in mid-July, while this is usually done at the end of June. This practically means that we are two weeks behind.

In addition, the RAI team continues to visit the five cities and there is still a joint meeting of the RAI people with the EBU, before the announcement is made.

What is certain is that all five candidate cities have the same chances and what has been said from time to time about supposed favorites has nothing to do with reality. RAI keeps its mouth shut and refers the interested parties to the official announcements, which, although they are not late, will not be made immediately.

Stay tuned to Eurovisionfun for all the developments related to the 66th Eurovision Song Contest!

August 4th was the first important date for the 66th Eurovision Song Contest. This was the deadline for submitting the application files of the cities wishing to host the contest next May. Of the 17 cities that initially expressed interest, only 11 finally submitted completed proposals. By the end of this month, RAI and EBU will announce the city that will have the honor, but also the responsibility to host Eurovision 2022! END_OF_DOCUMENT_TOKEN_TO_BE_REPLACED

The following cities aspire to welcome the Eurovision Song Contest next year: 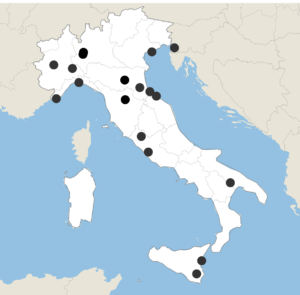 On July 14, 2021 the cities will receive the BID Book from broadcaster RAI and the EBU.  The candidates must submit their bid books and proposals up after August 4th, 2021.  After deliberation RAI and the EBU will decide which city will host next Eurovision Song Contest.  We will know the name of the next host city by late August.

Are you excited about the bidding process?  Which city should host the Eurovision Song Contest 2022?